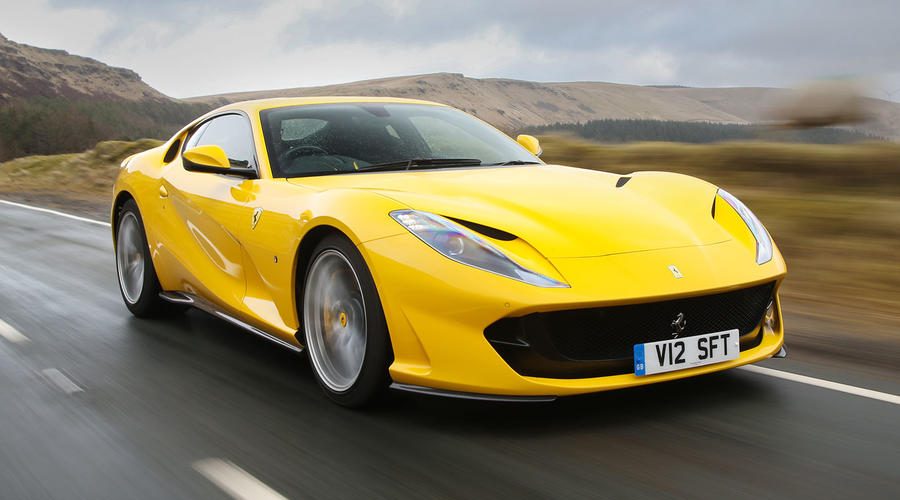 The 812 Superfast is the most powerful model ever manufactured by Ferrari if we leave the special series aside. It is animated by a V12 engine of 6.5 liters that dispenses 800 CV and sounds like the angels.

When they called me to propose the test, it was the closest thing to receiving a gift from the Magi, one of those you’ve been waiting for. What was my surprise when they said that we had to pick it up in Amsterdam and that for three days we could do what we wanted with it .

The first thing I did was to program the end of the trip to Andorra , AnyosPark to be exact. There was no better scenario to finish the test than the sensational roads of the Principality of Andorra, surrounded by monumental mountains, already snowed at this time of year.

The next thing was to propose a journey by sections of Autobahn without limitation , the most direct route did not pass through Germany, but as the saying goes, scabies with taste does not sting. On this 2,000 kilometer trip we drove on the roads of 6 different countries: Holland, Germany, Belgium, France, Andorra and, finally, Spain where we returned it at the Cars Gallery concession in Barcelona.

Before the test a bit of tourism

In Germany, we only stop at the Classic Remise in Düsseldorf , a meeting point for motor enthusiasts. In its facilities there are shops specializing in the sale of classic cars and sports collection, restoration workshops, storage for private customers, merchandising stores, a library dedicated to the engine … The dream of all petro-head.

The Classic Remise is housed in a historic building, a steam train workshop, the largest in the former German Empire. Through its 30 access gates, the railways accessed a revolving platform , in the place where there is now a restaurant.

Yevgeny, owner of Auto SL, and passionate collector showed us his most precious jewel, a 1958 Ferrari 250 TR made in 1961 by Vignale from an original chassis, with an original engine and all original spare parts.

With this real jewel on wheels we discover that the name of Testarossa comes from the red butts of that sports car . An element that has remained to this day, as is the case with 812 Superfast.

After the visit in Classic Remise we returned to the Autobahn . Given the nature of the test, its 20 “tires were equipped with Pirelli Sotto Zero winter tires. In fact, during our time in Belgium we experienced a very light snowfall.

This type of tires provide an important plus grip below 7 degrees positive . However, they are not the best for a sporty 800 hp and much less to enjoy in the Autobahn.

Above 250 km / h you feel that the car floats excessively , you know that it is going straight but there is a flamenco style motorboat that does not provide the necessary feeling to enjoy. It should be said that I would have to mount rubber bands of 275 in front and 315 in back, the Sotto Zero that I was wearing was 255 front and 305 behind.

After the moments of absurd speed in the Autobahn we crossed the border with Belgium to end up recalling in France. In both French speaking countries we stick to the corresponding speed limits. We already know how the Gendarmerie spends …

Very close to Reims, at the Hotel Chateau de Rilly we made the second stop of the trip after a first day of 700 kilometers . In its historic as well as comfortable rooms in this palace of the late 18th century we were able to rest after a hard day at the wheel.

Lately the design team captained by Flavio Manzoni is giving us real jewels. The 812 Superfast is no exception. It seemed that improving the F12 would be difficult but they have achieved it and with a vengeance .

Ferrari currently creates supercars with a captivating design, but at the same time elegant . One of the secrets to achieving this balance is the close collaboration between the design department and the aerodynamics department.

Some designs that provide large doses of downforce and the minimum coefficient of resistance . All this is achieved by integrating the ailerons inside the body.

Along with the headlights we find two small air intakes that are responsible for providing downforce on the previous train. The flow of air that accesses them comes out immediately after other openings of the hood .

In this same line there is a very similar solution on the rear axle , on both sides of the C pillar. The boot lid itself exerts like another spoiler to guarantee load on the rear. Under the rear bumper there is a diffuser also 100% functional.

Through its 20 “wheels you can appreciate the powerful carbon-ceramic  braking system fimited by Brembo with discs of 398 mm in front and 360 mm behind. Its front mono-block clamps are the same ones used by Ferrari’s hypercar, the LaFerrari.

4.65 meters long is not a very big car, but its almost 2 meters wide make maneuvering in narrow streets has its crumb … The wheelbase is 2.72 meters, a battle that is altered with the integral active direction. Although Ferrari announces an empty weight of 1,525 kilos, the brand itself states that in order of gear the set amounts to 1,630 kilos.

Its trunk declares 320 liters but if we want to maximize its load capacity with the gap behind the seats reaches 500 liters . An ideal volume to cross Europe from end to end.

The interior of the 812 Superfast offers what you expect to find in a car of this price . Good adjustments and first class materials. Since the shift cams are behind the steering wheel, there are no satellite controls here. All controls are integrated into the steering wheel. Start, lights, turn signals, clean

It could not miss the great protagonist of the steering wheel, the Manettino . A rotary knob inspired by those used by F1 drivers in their cars, which allows you to select the different driving modes.

The seats have an attractive design, but at the same time offer a good comfort. If the backup had something more fluffy, they would be even better . When it’s your turn to maneuver behind the wheel of a sports car like this, both parking sensors and outdoor cameras are appreciated.

Like its predecessor, the F12, the 812 Superfast offers a display so that the passenger can see in real time a lot of data . Both the navigation, the driving or even controlling the audio equipment.

I had never seen an engine with this eagerness to climb around . It is the closest thing to a racing engine that seems to have no end, well it has at 8,900 rpm, at which time it is up to the next gear to repeat this almost mystical experience.

One day after I returned it I could still hear the howl of this V12 inside my head . A sound close to the F1 of yesteryear, when there were no hybrid systems, no turbos, no other inventions. An addictive sound that is worth all the gold in the world.

Not only is it comparable to the best musical instrument ever created by man. It also pushes like no other engine. From just idling, starts an in-crescendo that explodes from 3,500 rpm when already dispenses 80% of the pair . The party continues above 5,000 rpm responding almost like a motorcycle of high displacement.

In the German Autobahn in depth I managed to do just over 200 kilometers with a tank of 92 liters of 100 octane Shell V-Power Lead Free . But tiny 200 kilometers. A consumption 2 liters at 100 km lower than the Mercedes-AMG G 63 with the German Job we did , just 46 l / 100 km at a superior ostensible rate …

It is unsettling. It may sound bad, but it’s hard for me to find another better adjective to describe this engine . Every time you accelerate thoroughly it seems impossible that I can do it with that virulence, with that musicality. And so once, and another, and another.

After more than 1,000 kilometers at 130 km / h on French highways we reached our final destination, Andorra . The first, as soon as we reached the small principality of the Pyrenees, was to stop at the AnyosPark facilities to rest from the process for galas.

The next part of the trip arrived the next morning. Enjoy this Gran Turismo on a mountain road as beautiful as the Coll d’Ordino , in the Parish of Canillo (Andorra).

There are super-cars that seem designed only to enjoy them on the circuit, while in the real world they disappoint. However, the Ferrari 812 Superfast is exceptional in the real world . A perfect sport to have a great time on the road.

With the Manettino in Wet mode, anyone can drive this 800 hp supercar . With Sport everything is accentuated, and if you want more spicy you can choose the Race mode. Of course, it is advisable that only those who know what they are doing disconnect the aid to play with their back.

Its V12 engine has cylinder banks separated by an inclination of 65 °. An atmospheric 6.5 liters that announces a specific power of 123 hp / liter . This is the most powerful street-powered Ferrari of all time.

This was the first time that at the wheel of a modern car I had to be careful when accelerating . Without controls you must do it, otherwise, the rear moves with great ease.

I love that even today, when practically all cars succumb to electronics, cars like the 812 Superfast still remain, a car that if you want it, you deactivate the aids and you are left alone in charge. A car to which you must show respect, but which as a counterpart will give you tons of pleasure at the wheel .

The chassis is perfect to have a great time. The 812 is effective, comfortable and most important of all, transparent . There are very few cars of this level of power that are so grateful when it comes to enjoying sports driving.

The integral active steering allows the rear train to turn in the opposite direction to the front axle at low speed , and in the same direction as the front at high speed. With this we are always modifying the distance of axles, which Ferrari catalogs

Passo Corto Virtuale, a novelty that was introduced in the F12 TdF and that inherits the 812 . All this is combined with the Side Slip Control 5, the latest evolution of the Ferrari stability control system.

The sequential double clutch gearbox with seven ratios is possibly one of the best available today . With stroking one of its cams up or down gear with incredible speed. The ratio of the marches has been shortened by 6% to increase the reactivity of the whole. In the same line, the change response has been improved by 30%.

The 812 Superfast is a car that is worth everything it costs , from the first to the last cent of a euro. 334,000 euros without any extra. This unit amounted to 406,000 euros, only his yellow paint Giallo Tristrato is 21,600 euros. It has one of the best engines I’ve ever driven, with a musicality worthy of the best philharmonic and with a level of power from another galaxy.

Recently I was able to attend the Ferrari Corse Clienti , XX Programs and F1 Clienti test days held at the Circuti de Barcelona-Catalunya. Of all those ultra-exclusive cars I’m left with the howling of the atmospheric V12 of the FXX , the first of the XX programs.

Every time I drove the 812 Superfast I felt a sound almost identical to the FXX and to top it off, its dual-clutch gearbox offers reductions that seem just as fast. It’s a Gran Turismo by configuration, but what it transmits is the closest thing to driving a road race car. Equivalent to a Porsche 911 GT3 with a more intoxicating sound and with a lot more power under the right foot.

By Cheryl Chernobyl
In Ferari