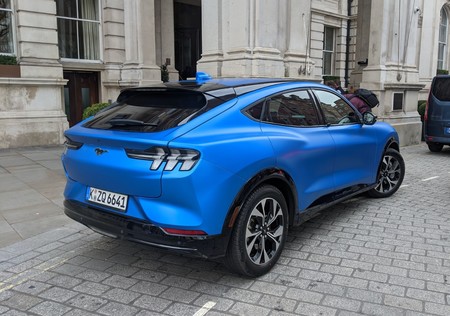 After several months of expectation after an erroneous figure was published and much lower than expected, the Ford Mustang Mach-E , the first electric SUV of the North American manufacturer, finally has an official price in Spain: it can be configured in four versions , choose between two batteries and has a starting price of 48,473 euros .

The Ford Mustang Mach-E measures 4.71 m in length, 1.81 m in width and 1.59 m in height , so it is framed within the D segment where it will rival models of the size of the Tesla Model Y , BMW iX3 , Jaguar I-Pace or Mercedes-Benz EQC , but with a more affordable price.

While the Jaguar I-Pace is marketed from 80,570 euros and the German SUVs close to 80,000 euros, only the Tesla Model Y Gran Autonomy manages to approach, albeit remotely, the cheapest version of the new Ford Mustang Mach-E with a base price of 64,000 euros , that is, 15,527 euros more.

The oval firm has begun to form the lineup of its highly anticipated zero-emission SUV, which is available for rear-wheel drive (RWD) or all-wheel drive (AWD) orders .

Both powertrains can be selected in Standard or Extended Range versions . The first offers a range of between 420 km and 450 km according to the WLTP homologation cycle thanks to a 76 kWh capacity battery , while the second is equipped with a 99 kWh battery to achieve up to 600 km of range between charges.

As for the performance on the asphalt, the Ford Mustang Mach-E Standard is equipped with an electric motor capable of developing 254 hp , 415 Nm of torque and going from 0 to 100 km / h in 8 seconds. All this promising a range of 450 km.

For its part, the Extended Range Ford Mustang Mach-E homologates 281 hp , although the torque and acceleration figures at 0-100 km / h offered by the brand remain unchanged despite the fact that it is the variant that grants more autonomy. : up to 600 km in WLTP .

Where the benefits do vary slightly is in the AWD versions, with a propeller on each axis. The Mustang Mach-E Standard AWD performs the same 281 hp, but raises torque to 565 Nm and cuts one second in acceleration from 0 to 100 km / h (7 seconds) . In return, yes, the autonomy is reduced to 420 km WLTP.

And the version that crowns the range, at least for the moment, is the Ford Mustang Mach-E Extended Range AWD, which shoots its power up to 332 hp promising a range of 540 km .

At the moment the Mustang Mach-E GT will not be available , the most powerful and sporty version that is expected to land on the market next year.

The first deliveries of the Ford Mustang Mach-E will take place later this year . Meanwhile, we will have to be attentive to the arrival of more versions.

For the moment, the range of the electric SUV is made as follows: