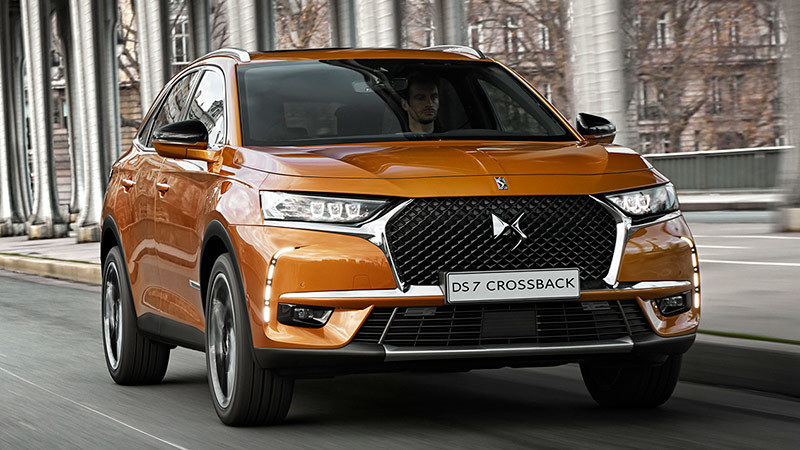 The DS 7 CROSSBACK is a new DS model, the brand under which the PSA group markets its most luxurious models. It is an off-road vehicle that measures 4.57 meters in length, a size similar to that of a Mazda CX-5  and a Land Rover Discovery Sport . Production will begin in October 2017 and the first units will be available in January 2018, although reservations can be made even though prices are unknown.

It will be available with three petrol engines -PureTech 130 hp, THP 180 hp and THP 225 hp- and two Diesel -BlueHDi 130 and 180 hp. The 130 hp petrol engine will always be with a 6-speed manual transmission, 130 hp diesel with manual or with an 8-speed automatic (EAT8) and the rest always with the EAT8 automatic (it is a torque converter type ). All versions have a system of automatic stop and start of the engine in the stops ( Start & Stop ).

In the spring of 2019 there will also be a plug-in hybrid version of 300 HP called E-TENSE. It has a gasoline engine of 200 hp and two electric of 109 hp each (although the combined maximum power of the electric is limited to 122 hp). It has four-wheel drive and the 13 kWh lithium-ion battery (located under the rear seats) gives an electric range of 60 km. The charging time of the battery in a 16 amp power outlet is four and a half hours, while in a 32 A outlet is less than two and a half hours.

The 7 CROSSBACK will have a system that, according to DS, “paves the way for autonomous driving”. It is called DS CONNECTED PILOT and consists of a vehicle in-lane maintenance system and an active speed programmer . It runs between 0 and 180 km / h and does not require the lane lines to be perfectly painted to perform their function (until we do not try it, we will not know its ability to stay in the lane and to do it in tight corners). If the vehicle in front stops, the 7 CROSSBACK also does it and restarts automatically if the stop lasts less than 3 seconds.

The DS PARK PILOT system does all the necessary maneuvers (controls pedals and steering wheel) to park the vehicle in one place, either in line or in parallel. The system is able to detect gaps when driving below 30 km / h.

DS NIGHT VISION is a system that supports the illumination of led headlights. It consists of an infrared camera that can identify objects and people that are at a distance of up to 100 meters. The information that captures the sample in the screen of the instrumentation and the objects and the people that detects them frames in yellow lines that turn red when there is danger of colliding with them.

The DS ACTIVE SCAN SUSPENSION system records the ripples and bumps on the asphalt – and that are at a maximum distance of 5 meters in front of the car – through a camera and prepares the suspension to pass over them. Lacking more data, it looks like a ROAD SURFACE SCAN system that Mercedes-Benz uses in some versions of the S-Class.

The front seats can have electrical settings and functions of heating, ventilation and massage. The back row tilt of the back row can be varied electrically by 9 degrees. The trunk volume is 555 liters, making it larger than the Mazda CX-5 (463 liters) and smaller than that of a Honda CR-V (589 liters).

According to our measurements, the DS7 CROSSBACK has a normal range among its main competitors (which the brand quotes as the BMW X3 or Audi Q5 , among others). In the front seats there is 142 cm in width, 4 cm less than in a BMW X3 and the same as in a BMW X1. The height with glass roof is a maximum of 94 cm, enough for tall passengers, but far from the best, such as the Škoda Kodiaq , which reaches 101 cm with electric roof. Back, the available space for the legs is the same as in a SEAT Ateca , 72 cm, and one centimeter more than in an Audi Q5. The width for these passengers is the same as in a Mazda CX-5 or a SsangYong Korando  (both with 139 cm),

The instrumentation is seen on a 12-inch screen and the multimedia system and other functions like the air conditioner are handled through another screen of the same size. At the top of the console is a BRM R180 digital clock that rotates 180º depending on whether the engine is turned on or off. There are five “decorative environments”, which are called Bastille, Rivoli, Faubourg, Opéra and Performance Line. In each one is made a different use of materials and colors of the leather napa, of the wood and the fabric Alcantara. The optional sound equipment, which gives better performance, is developed by the FOCAL specialist.