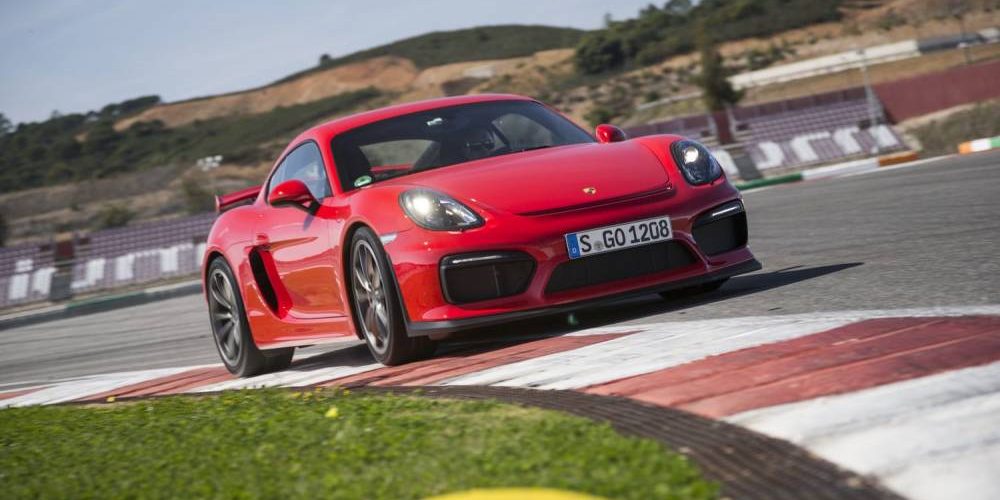 Cayman GT4 Review – The Cayman GT4 is for very demanding customers. Those who find the Cayman GTS a little short in terms of performance, but also the 911 GT3 too sophisticated with its double-clutch transmission and rear-wheel steering. None of that here: just a perfectly balanced chassis with a large flat-six installed in a central position, driving the rear wheels through a manual 6-speed sports car pure somehow .

GT4 is assembled on the same line as other Cayman in the former Karmann plant in Osnabruck in northernGermany . The body in white gets some slight modifications to strengthen and facilitate the assembly of the bolted shackle proposed in the Club Sport package (including 6 points and also harness extinguisher). The front axle, the electric power steering and shock absorbers (inverted, aluminum and controlled) are derived from the 991 GT3. The rear suspension uses the McPherson principle used Boxster and Cayman, but uses hub carriers and unpublished arms, stiffer, partly hinged joints, and determine a raised roll center despite the ride height reduction of 30 mm GT4 compared to a standard Cayman.

The engine is the 3.8-liter flat-six of the 911 Carrera S slightly modified in peripheral to function rear center position. The power down to 400 “only” 385 hp is due in particular to this implementation restricts the volume of the intake manifold. The 6-speed manual gearbox is an evolution of the Cayman GTS. It includes a limited slip differential (blocking 22% thrust, decelerating 27) and receives enhanced transmission output tulips. The brakes are taken from the 911 GT3. The front tires too – even if they are mounted on rims a half inch narrower – while the rear has been developed specifically for the Cayman GT4. This is Michelin Pilot Sport Cup 2 semi-slick tread which consists of two different mixtures of gum, soft on the outside to increase the passage curve on dry ground speeds, harder inside to preserve the life.

In addition to its huge 20-inch wheels, the GT4 is clearly distinguishable from the base Cayman aerodynamic attributes. Its front bumper is more open to meet the engine’s cooling needs and brakes, but especially prominent significantly (+ 34 mm in length) to increase the downforce on the front axle.For good measure and balance the whole, so we had to add an imposing rear wing resting on two aluminum poles. Result, the total support generated 295 km / h up to 100 kg and may be further increased to about 10% by removing two small brackets bolted to the air flow ducts passing under the shield of the front blade and shining fin maximum. However, this extreme setting is not approved on road because the fin while obscuring part of a brake light located on top of the rear window.

Cayman GT4 Review – LIFE ON BOARD

The interior of the GT4 only evolves in small steps compared to a base Cayman, but these are invitations to the steering.Beyond the anecdotal replacing doorknobs with straps “way race” is covering the Alcantara steering wheel, 3-spoke and gearshift knob that immediately puts in the mood ensuring very secure grip of these control elements. Alcantara upholstery which is also excellent seats original sport. However, for many customers GT4 which will go on the track seek the limits of their toy, we can only advise to check the piece bucket optional carbon fiber taken from the 918. Great and significantly lighter, they allow you especially instantly making body with the GT4 helping you to be more precise in your movements, it applies to the steering wheel, the pedals or … the gear lever.

For these trips circuit, the Sport Chrono Package will be valuable. In addition to the analogue display stopwatch enthroned in the middle of the dashboard and can display parameters such as lateral and longitudinal acceleration, this option provides for the installation of a sensor to trigger automatic timer and measures the passage of an infrared emitter positioned along the circuit. Free smartphone application can then act as a data acquisition system recording, in addition to video, many car parameters (speed, cornering, braking, acceleration …) via Bluetooth. Result, in addition to instant display of your advance or delay with respect to the reference chosen tour, you can analyze your driving post to progress, possibly by comparing data with other system users. A learning tool!

In fact, it is mainly as a precision tool in the art of steering the GT4 appears in the heat of the moment.Starting with its engine. If the sound of the flat-six 3.8-liter atmospheric, crevice at low speed, metallic May to August 000 r / min, evokes the finest hours of the chartsPorsche in competition – it seems to take the start of Le Mans 24 Hours after each toll motorway – the throttle response was much more docile than demonstrative. Without inertia and very linear, it allows the driver to any right the first time: starting and speed changes smoothly at low speeds, and as soon as the speed increases, passes on the fly and heel-toe; a treat. Certainly, just press the Sport button and the engine computer automatically adjusts the speed during downshifts, but it’s so much more fun to do and involving yourself … Especially as the manual – which the lever has been shortened to reduce the movements compared to the Cayman GTS – shows such quick and accurate in the heat of the moment that does not tire to shell the 6 reports.

And the rest of the controls is to match. The brakes are up to the reputation of Porsche in this field, a powerful and indestructible endurance, even on circuit. If we preferred the discs cast of origin because of a better bite attack decelerations Road, carbon-ceramic optionally available (PCCB) are more constant in extreme use, and allow themselves a relief 17 pounds, and, what is more, the unsprung masses. What to facilitate the work of the damping control taken from the GT3 and stunning efficiency. Comfortable enough to calmly consider daily use, it clears the bumps of the coating of county roads to the most unmentionable speeds while ensuring sufficient cash holding to be compatible with a genuine use on position “sport”.

Circuit he is indispensable to attend to explore the limits of the Michelin Pilot Sport Cup 2, while expanding its technical background.Validated by the legendary Walter Röhrl, the factory settings emphasize stability for maximum efficiency in the fast sections. Those who would conduct more player on a slower track just have to put the car on a bridge to change the anti-roll bar settings, from soft medium front, medium hard rear. For those who want to go further and develop their skills, it is also possible to adjust the ride height and camber values ​​front and rear … That said, Porsche wishes to recall that the time of 7 min 40 s done on the Nürburgring Nordschleife was with the factory settings, whether the suspension or aerodynamics.

Under the hood of the Porsche Cayman GT4 Review

By Cheryl Chernobyl
In Cayman