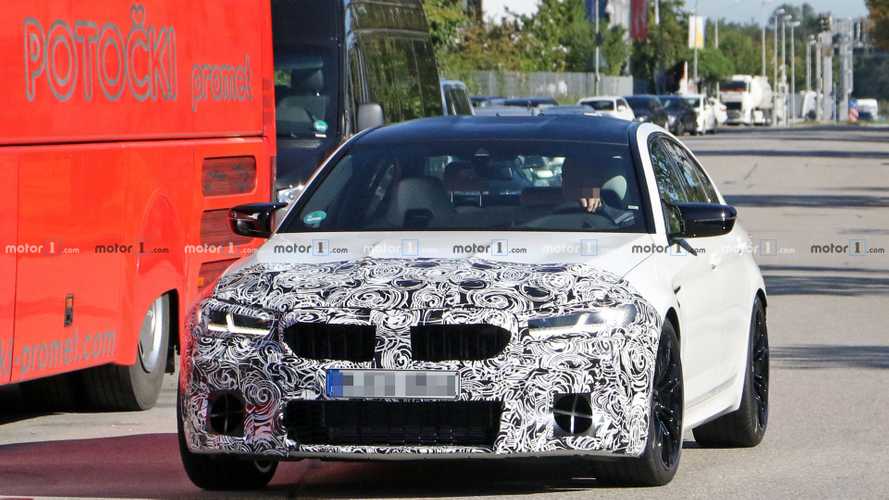 It is no secret to anyone that BMW is working on a restyling for the 5 Series . We have seen the tests of the new models on public roads, in the sedan and tourer versions, and this new series of spy photos gives us the first taste of the updated M5.

This slightly camouflaged prototype offers a first look at what to expect when the restyling model arrives during the second half of next year.

The front film hides a revised front band with what appear to be redesigned laser lights, which incorporate two different internal graphics for LED daytime running lights . The kidney grid seems to be a little bigger than before, but we will be able to confirm that once the disguise comes off . The bumper probably also has some modifications, including remodeled air intakes and a new lower grille.

Same story for the rear. The revisits are not important but the camouflage suggests some corrections to the design of the rear lights. In fact, the entire rear bumper is masked, which could mean that the diffuser and the overall layout may be different. The exhaust pipes, on the other hand, seem unchanged compared to the M5 on sale today.

Unfortunately, we have no details on the sedan mechanics. The M5 is currently powered by a 4.4 L V8 bi turbo, which develops 600 hp and 750 Nm of base torque. The M5 Competition has 625 hp and the same level of torque.

The engine could be revised to provide a little more power and less CO2 emissions. Suspension and brake modifications could also be among the features, but for now nothing can be confirmed .