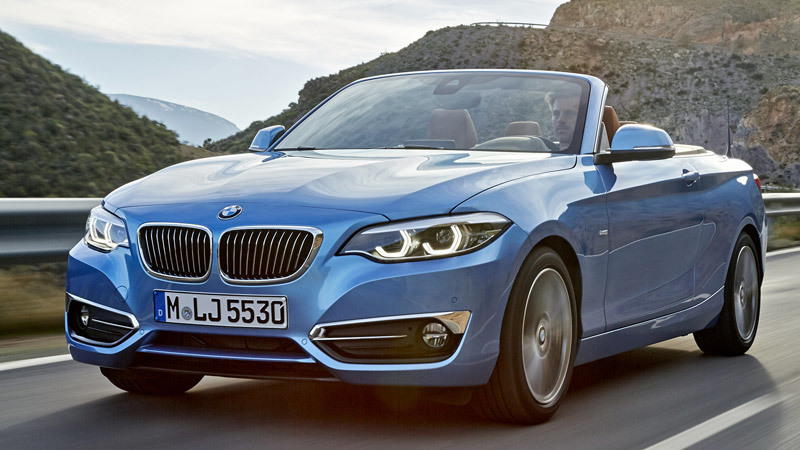 BMW upgrades the BMW 2 Series it launched in 2014 with coupe bodywork and in 2015 with a convertible. Changes affect appearance and equipment. There are no changes in the range of engines, which have between 150 and 340 horses (this last level of power corresponds to the version M240i). BMW has also updated the M2 sports version of 370 hp .

On the front there are new headlights, which are always light-emitting diodes for both short and long-range functions. In option there are some adaptive type. The pilots are also light-emitting diodes. The calender is of greater dimensions, as well as the air inlets of the sides of the bumper. Some of the alloy wheels of 16, 17 and 18 inches in diameter have a new design. The body can be chosen painted in three new optional colors (Blue Mediterranean Blue, Blue Seaside Blue and Orange Sunset Orange).

In the interior there are changes in instrumentation, in the dashboard (which has a slightly different design), new moldings (that can be of aluminum, glossy black plastic or wood) and in other details like The controls of the doors. There are also new upholsteries, both fabric and leather. The most advanced multimedia system, 8.8 inches, with the Professional browser now has a touch screen (which is already available on other BMW models). Among the front seats is the iDrive control that, as a novelty, has a surface also tactile to enter destinations in the browser.

The BMW 2 Series Coupé and Cabrio have a length of 4.43 meters and its interior is planned for four occupants. In the rear seats of the Coupé there is more room and therefore more comfortable travel. The trunk of the model with closed body is 390 liters; The convertible has one whose capacity is 335 liters if the roof is on the body and 280 liters if it is stored. The hood is of canvas and can be opened and closed automatically up to a speed of 50 kilometers per hour.

Below is a summary of the combination of bodywork, gearboxes and traction systems available. The 225d and M240i versions have the “sporty” version of the eight-speed Steptronic gearbox, with cams behind the steering wheel.