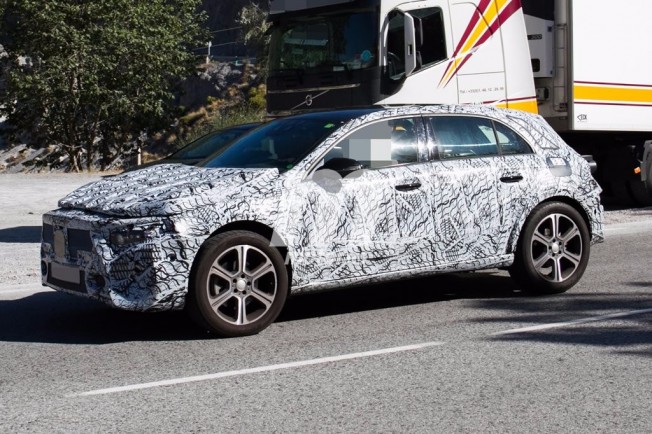 Although the current Mercedes GLA recently received an update , the brand of the star has long been working on the smallest crossover substitute range. Like the Class A, which will premiere next generation soon, the crossover version based on the family of compact models will also be renewed, reaching the market in 2019 as a model 2019.

As the first generation, this new iteration of the German C-SUV will be based both technically and aesthetically in the Class A , which will be unveiled at the next Frankfurt Motor Show 2017 , which will take place between 14 and 24 September this year. same year. Of the compact we have already seen several units of test in the last months, and according to the state of those prototypes, its development is about to conclude . In fact, the brand is already finalizing the details of the new AMG variants .

At the moment, the new GLA 2020 Class continues in a very primitive state, these test mules still have the body of the new Class A 2018 , so there is still time for us to see a unit with its final appearance.

However, like the previous model, the GLA will have an image very close to that of the hatchback variant , so that its general shapes and volumes should not differ too much with respect to the mule that appears in the photographs.

Like the new generation of Class A, the GLA will grow in size with the change of generation . Thanks to the use of the evolved MFA2 platform, updating the MFA platform used by current generations, will gain space for both the passenger compartment and the exterior. In the mechanical section we will find 4-cylinder engines taken from the catalog of the range of the compact model, with a roof above the 400 hp of the new variant AMG GLA45.

The MFA2 platform can accommodate electrified variants , so like the compact, the new GLA could have variants of this type. The arrival of the new Class A will be at the end of this year, and the following year will be presented the crossover variant, as model 2020.