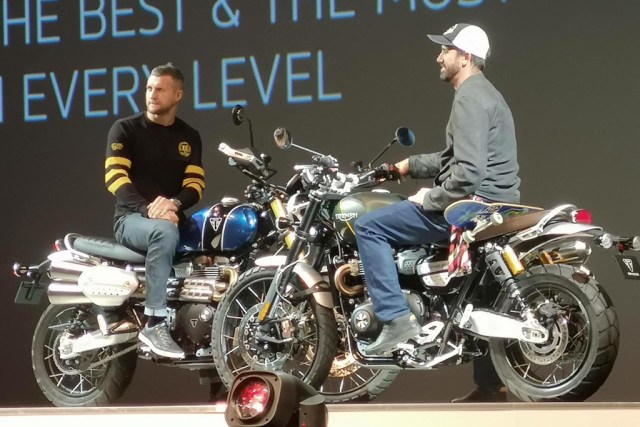 Triumph Motorcycle has launched the new Triumph Scrambler 1200 which they claim is the most powerful off-road motor in its category. Why ? Triumph Scrambler 1200 has been supported by a 1,200cc parallel twin HP engine, liquid-cooled Triumph Thruxton that has been re-tuned, and coupled with firing orders and a 270-degree crankshaft also used by the new T120 Bonneville .

Why use a 270-degree crankshaft instead of 360 degrees that was originally used by Triumph. The reason is : the engine produces more character sound while minimizing engine vibration.

The new engine makes the Triumph Scrambler 1200 stronger because it can produce a maximum power of 90 hp at 7,400 rpm. That figure was 12.5 percent stronger than Bonneville T120, and 38 percent stronger than Street Scrambler. In terms of torque, the Scrambler 1200 engine is tuned to produce more torque in the lower and middle turns; the result is 110 Nm of torque at 3,950 rpm from the new engine. That means 37.5 percent more than Street Scrambler.

Triumph said the engine had been set for a strong low and medium range and while the internal gears in the six-speed gearbox remained the same, the final drive ratio had been modified. Clutch slips and assists are easier to control for congested traffic conditions in cities.

The latest Triumph Scrambler 1200 comes in two choices, namely XC and XE. The difference between the two is in the seat height. The 1200 XC Scrambler has a seat height of 840 mm while the seat height at XE is 870 mm. The dry weights are 205 and 207 kg, respectively, which is the same as Tiger 800.

The electronic package on the Scrambler 1200 is quite complete. For starters, there is a second generation TFT screen that features several unique features. The first GoPro control system is integrated with a motorcycle. Triumph claims this breakthrough is the first time in the world. Developed in conjunction with GoPro, this cool feature allows you to control several functions of the GoPro action camera. In addition, there is also a navigation feature that results from collaboration with Google Maps and Bluetooth.

In terms of design style, the XE version is equipped with a hand protector with aluminum clamp, MCS Brembo lever, silver-plated handlebars with anodized risers and a gold fork. While the XC variants are colored Jet Black and Matt Black, as well as Khaki Green and Brooklands Green, the Scrambler 1200 XE is colored Fusion White and Brooklands Green, and Cobalt Blue and Jet Black.

The new official price was announced by Triumph on the upcoming December 14, 2018.