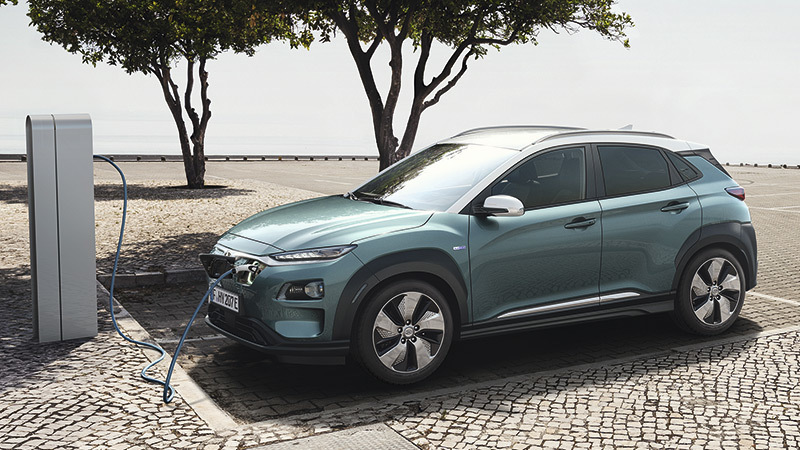 The 2018 Hyundai Kona Electric is an electric vehicle of 4.18 meters in length. It is already on sale in two variants: one with a 135 hp engine and a homologated range of 312 km, from 35 700 euros, and another of 204 hp and a range of 482 km, from 38 700 euros. The figures of autonomy are applying the guidelines of the WLTP regulation (it replaces the NEDC and theoretically gives results closer to the “real ones”, in the NEDC cycle they are, respectively, 345 and 546 kilometers). The traction is always on the front wheels.

With a similar body size and electric motor, currently only the KIA Soul Electric (111 CV) is available, which is cheaper, and the Volkswagen e-Golf (136 HP), more expensive. Both are comparable only to the less powerful version of the KONA Electric. The other models such as the Hyundai IONIQ Electric or the Nissan Leaf , are noticeably larger, but not more expensive. The only alternatives to the 204 horsepower version are the BMW i3 (170 hp) and the i3s (184 hp), the first cheaper and the second, more expensive.

The battery of 2018 Hyundai Kona Electric is polymer lithium ion, is placed under the passenger compartment and has a capacity of 39.2 kWh in the version of lower power and 64.0 kWh in the most powerful. In a 7.2 kW socket, the recharge time is 6 hours and 10 minutes for the lower capacity battery and 9 hours and 40 minutes for the large battery. The connection port is on the front grille, next to the Hyundai logo . The trunk volume is 332 liters (373 if space is included to store the charging cable). The trunk of the KONAgasoline is 361 liters in the versions with front-wheel drive and 332 liters in the all-wheel drive.

The average power consumption of the short-end version (that\’s what Hyundai calls it) is 14.8 kWh / 100 km, while the engine of the longer version consumes an average of 15.2 kWh / 100 km. There are several levels of retention – which can be chosen with some levers behind the wheel – to increase more or less the recharge of the battery in the moments when it stops accelerating.

There are important changes in some parts of the interior. For example, the instrumentation is a 7-inch screen  instead of a panel with needle indicators. Another area that is different is the center console from the air vents down. In the Electric KONA it falls much closer to the horizontal and there is an area below the control controls where objects can be stored. In the Electric KONA there is not a shift lever, but some buttons that take the usual place of it and with which to select the usual positions P, R, N and D. The parking brake is electric (in the gasoline KONA it is manual).

As in the KONA gasoline, the KONA Electric has a data projection system or head-up display. The information is projected onto a plastic sheet that unfolds in the upper area of ​​the instrumentation, near the windshield. It also has safety devices and driving aids such as the automatic change between short and long lights , the emergency braking system with pedestrian detection , the alert for the presence of vehicles in the blind spot of the exterior mirrors and the warning by crossed rear traffic (whose function is to make the reversing parking outputs safer). The multimedia system has compatibility with Android Auto and Apple CarPlay.

Hyundai already has another electric model in its range, the  IONIQ Electric , which is a tourism, unlike the KONA, which has off-road bodywork. The IONIQ has a 120 HP motor and a 28 kWh battery. Its homologated autonomy (NEDC) is 280 kilometers.

By Cheryl Chernobyl
In Hyundai