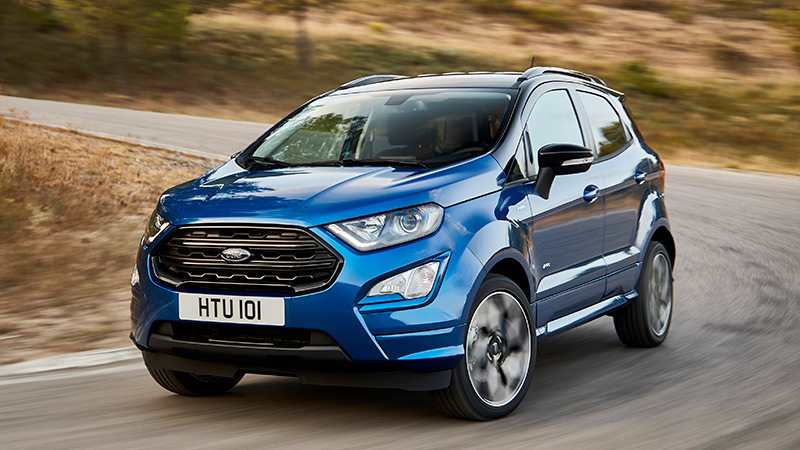 During the first quarter of 2018, Ford will put on sale a deeply renovated EcoSport. It will launch a new range of diesel engines called “EcoBlue” and a full-traction system, will include new equipment elements and a different design both outside and inside. It will replace the 2015 model , which in turn was a slight update of the 2014 model .

At the moment we do not know the exact size of the 2018 Ford EcoSport, but should not be very different from its predecessor (measured 4.02 meters long, 1.76 m wide and 1.36 m high). It remains, therefore, an alternative to models like the Peugeot 2008 , the Renault Captur or Opel Crossland X .

The most important aspect changes are concentrated in the front of the vehicle, where Ford has installed new bumper, grille and fog lamps. The main headlamps also have a different shape, include daylight by means of ledes and, optionally, xenon lamps for the short range function. In the back is different the bumper and the pilots, that maintain the same form that the previous model but they are colored in a darker tone. The body, as in the model it replaces, can be optionally painted in two colors: one for the roof and the covers of the mirrors and another for the rest.

There are also important modifications in the passenger compartment: the dashboard now has a similar design to the Fiesta and includes a new generation of multimedia systems with 4.2, 6.5 or 8 inch color displays (the latter, compatible with Android systems Google Car and Apple CarPlay;). The instrument cluster is also completely different, consisting of two needle indicators and a 4.2-inch color display from which the various travel computer parameters or driving aids can be displayed and some functions adjusted vehicle.

Ford has installed some new front seats (says they are more comfortable) and offers the possibility of equipping an ambient lighting system with seven selectable colors. The trunk has 334 liters of capacity (24 more than the previous model) and opens a dividing table that can be placed at two different heights.

The initial engine range consists of two gasoline -1.0 EcoBoost 125 and 140 hp – and two Diesel belonging to a new family called “EcoBlue” -1.5 of 100 and 125 hp. In mid-2018, Ford will add to the range another petrol engine of lower power: 1.0 EcoBoost of 100 HP. The standard gearbox of all versions is manual and has six ratios, but optionally an automatic with identical number of speeds can be ordered for the 1.0 EcoBoost 125 hp engine (also in mid-2018). The Diesel version of greater power -1.5 EcoBlue 125 CV- will be the only one that can be associated with a system of total traction, option that was not available in the previous range. Below is a table with the combinations of engine, gearbox and traction system:

Like other Ford models, the EcoSport can be ordered with the ST-Line equipment level, which includes a series of specific aesthetic details. It is distinguished from other versions of the range because it has a bumper and more prominent skirts, 17-inch alloy wheels painted in black, a ruffle flattened at the bottom with red stitching, seats with leather-trimmed sides ‘Green’ and stainless steel pedals.

Optionally, the 2018 Ford EcoSport may have some equipment elements that were not available in the previous model, such as a blind spot detector , a Bang & Olufsen Play sound system with ten speakers, a heated steering wheel or a perimeter alarm. The side airbags and curtain airbags are different and according to Ford, offer greater protection for passengers. As in the previous model, the spare wheel can be mounted on the outside of the vehicle, in the tailgate.