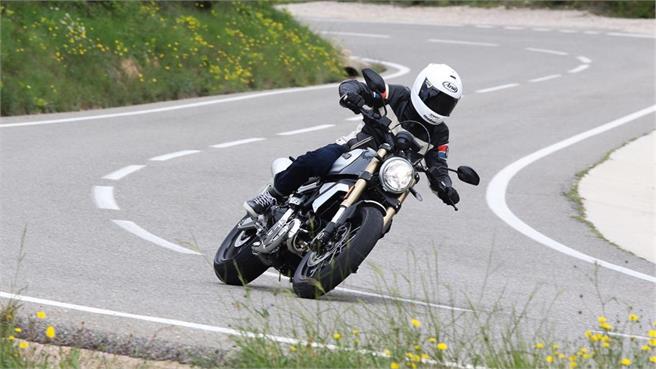 2018 Ducati Scrambler 1100 Review, The great success of the Scrambler range has prompted the Italian company Ducati to continue betting on increasing the versions and engines. If in 2015 the new generation began with the 800 motorization, in 2016 the 400 arrived and now in 2018 they venture with the Scrambler 1100 , something more powerful, more voluminous and with an own electronics of the best naked in the market. During the national presentation we had the opportunity to make contact with the Special version of this new top of range

It was clear that sooner or later Ducati had to grow its range in terms of displacement, since the Sixty2 and Icon or what has been 400 and 800 in all variants, had reached a ceiling in terms of technology and equipment. That is why the decision to recover the engine of the Monster 1100 – with numerous changes, of course – together with modern electronics and better equipment make these new engines more attractive for customers with higher aspirations. And it is not only that the 11 HP of power suppose an extreme gain in pure benefits, it is all that the new denomination implies.

And this is where we find a quality of finishes and materials that goes a step further with respect to its sister range. In this sense, fully adjustable suspensions have been incorporated, a removable aluminum subframe as well as larger overall proportions. We can also see that in the fuel tank that gains 1.5 liters – 15 in total -, the seat height and width are greater, the front wheel goes from being 110/80 to 120/80 and the battle has increased by 69 mm thanks, above all, to the new swingarm. But the improvements do not end here because this new engine includes better brakes, a double exhaust that now has its end just below the seat, watches have more information and many small accessories or embellishments decorate a set in view more careful.

But that\’s just material details. Where really the Scrambler 1100 supposes a quantitative jump in the adoption of electronic systems that elevate it to another level. So, the electronic accelerator, the traction control with four levels of action and even disconnectable, the ABS in curve or the power modes,they are all connected to a brain called IMU or Inertial Measurement Unit. An element that measures at all times the parameters of the motorcycle, both acceleration, speed difference in each wheel, inclination, mass transfer, etc. All this in order to manage driving aids at all times and raise safety exponentially. This element is typical of motorcycles of greater power and more “sporty” segments and it is at least curious that we already find it in this niche of models … Without a doubt a good sign.

In this version we have worked on the design of a new chassis, in addition to incorporating a clutch with hydraulic drive with adjustable handle as well as the front brake consisting of two 320 mm discs and radial anchor clamps. A multi-adjustable front fork is also incorporated , as well as the rear shock absorber with adjustments in spring preload and hydraulic extension. For its part, the rear clamp is larger and the swingarm of new invoice also. However, the equipment does not end here and is enhanced by the incorporation of the daylight or DRL, the detachable intermittent car, the pre-installation of the heated cuffs or the Ducati Multimedia System, even a USB charging port under the seat.

As regards the preselected power modes, they are divided into three: Active, Journey and City. In the first two the maximum power is available varying the accelerator action -more or less direct- in addition to a greater or lesser traction control. In the third option the power is limited to 75 HP – the same as a Scrambler 800 – the feel of the accelerator is softened to the maximum and the traction control is set to the maximum.

For the occasion and during this national presentation, the brand put at our disposal Special versions of the new Scrambler 1100, which implies a differentiated equipment with respect to the basic one and which is available in both yellow and black. The Special is only available in gray and the most sporty or Sport in black with details in yellow.

Our protagonist, the Special, can be clearly differentiated by many details in aluminum: the front fender, the rear, the brushed swingarm or the chrome exhaust manifolds. In addition, the handlebar is flatter with respect to the standard, the rims are spoke, the seat has a specific upholstery and termination and the front fork of 45 mm anodized is gold.

At its controls is more voluminous in relation to the 800, with a seat in the front area wider, with a handlebar that makes you take the arms widely separated and an instrument panel divided into two and where the protagonism with larger graphics it is carried by the gear indicator and the speedometer.

The bi-cylinder character is already there, and because our test units had very few kilometers of shooting , in my case only 10 km on the total score, I decided to take things slowly, rolling quietly in the mode of driving Journey and where the traction control is preselected to 3. It should be noted that, to change from one mode to another, the transition is not entirely simple at first … At least in my opinion

Once the lesson is learned, the operation is carried out with greater ease and switching to Active mode offers you all the character of the engine at full capacity. I find it strange that at Ducati they did not “tighten” the mechanics a bit more and to go around the 95 HP would have been ideal; simply to separate it a little more from the 800 given its much higher price. And it is that if we compare it with his sister of 75 HP the new Scrambler 1100 in this version Special weighs with full 211 Kg which results in a weight / power ratio of 2.45 Kg / CV for the 2.48 Kg / CV of the 800 that only weighs 186 Kg in running order. However, the advantage can be somewhat greater if we compare it with the 206 Kg of the standard 1100 …

So, dynamically speaking, the Scrambler 1100 is not much more agile or faster than an 800. At least subjectively and their controls are noticed the difference kilos. Another thing is that the behavior is more effective thanks to the best suspensions, the chassis and some brakes that provide double front disc as well as an anti-lock system even in curve as other models of the Italian brand.

Once we traveled some kilometers more, I started to stretch the mechanics and the performance is satisfactory for what is expected from such a model. Comfortable in general, perhaps with a soft seat somewhat hard for my taste and a handlebar too wide. However, that favors leverage in the direction and the reactions are instantaneous. The Scrambler 1100 has the nobility of its younger sisters and with a still improved poise given the longer wheelbase. Although we do not touch sections of fast roads, the sensation is of greater fluidity in curves of wider radius.

The change on the other hand is smooth in the increase of marches and something less in reductions, with a seizure -in this case- with hydraulic drive that in my unit was a bit hard for my taste, needing something more force to operate the handle . On the other hand, the brakes perfectly fulfill their purpose, with a very good touch and mordant, in any case. Of this goes over.

So, the Scrambler 1100 is that fun and dynamic motorcycle that is expected. It has not lost any of the essence of this new generation and maintains the spirit of its origins by expanding its horizons towards more demanding clients and seeking in its details that extra quality

It is true that by economic positioning the Scrambler 1100 is in the line of BMW with its range R nineT, but we must bear in mind that one of the main rivals will be in the own Ducati. The Scrambler 800 I\’m sure will remain the most popular more if possible thanks to the wide range of existing versions.

In general lines the Scrambler 1100 I liked a lot in terms of quality jump visible termination in every detail and especially the touch of elements in aluminum and the chrome of the exhaust manifolds. Of course, the Safety Pack or electronic safety package raise it to another level and should be an aspect to consider, but speaking of a motorcycle that costs € 14,490 perhaps missing some small elements that would make it even more attractive and especially an engine something more enhanced …

By Cheryl Chernobyl
In Ducati