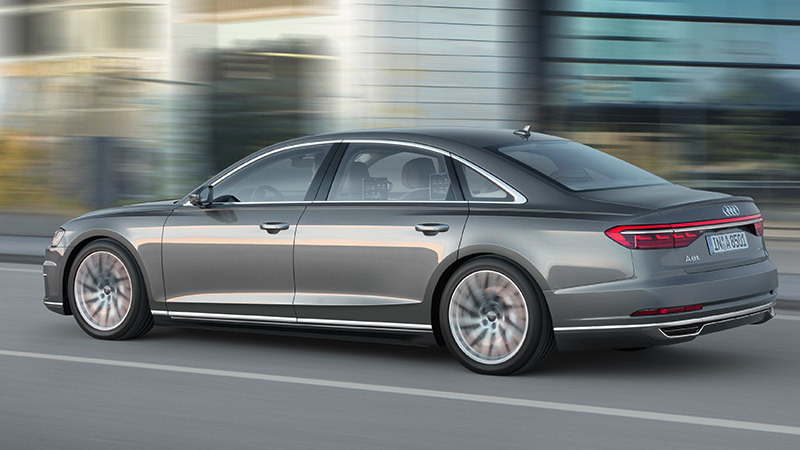 2018 Audi A8, This is the fourth generation of the Audi A8. It is built on a new platform and unveils elements of equipment related to comfort, lighting and autonomous driving – it is the first car to offer a level 3-. It reaches dealerships in October with a starting price of 97,500 euros.

As in previous generations there are two bodies of different length, 5.17 m the shortest and 5.30 m the longest (in both cases, 37 mm higher than in the A8 2014 ). All the gain has repercussions in the space for the rear seats, not in the trunk, which is identical.

In addition to the Diesel 286 hp, we tested the version with six-cylinder petrol engine that gives 340 horses. Both have plenty of power to move the A8 with much relief, are silent and deliver power in a smooth, progressive and forceful. The A8 is midway between the vibrancy of a BMW 7 Series and the acoustic and suspension comfort of a Mercedes S-Class . A Porsche Panamera is a much more agile and responsive to the driver\’s orders, but less spacious and less comfortable. There are more details on driving impressions.

Although these competitors can have a tremendously extensive equipment, none, at this moment, can have all the elements that can equip the A8 at the same time (they can have one or several, but not all): laser lights, OLED pilots, electrification to 48 volts, elements in carbon fiber or active suspension, for example

One of the most relevant technical aspects is the incorporation of a 48 V electrical network, which is used to achieve light hybridization across the range of motors and to supply current to a new suspension. This network becomes the main and leaves the 12 V as secondary (in the Audi SQ7 , the 48 V is considered secondary when obtained with a transformer that raises the voltage of 12 V).

There will also be a plug-in hybrid version -A8 L e-tron of 449 hp, only with the long body. The term “plug-in” is short because the battery can also be charged without cables, by magnetic induction (as do the electric toothbrushes), so it is necessary to place a platform under the car supplied by Audi as an option. The autonomy using only electricity is 50 km (depending on the consumption approved).

All versions have as standard a suspension of  pneumatic springs  – with four possible heights -,  shock absorbers  with variable firmness and total traction. This basic configuration can be modified with a steering system to the rear wheels and an active rear differential.

The suspension can be improved by acquiring the so-called \’Audi AI active suspension\’ (optional on the V6 TFSI and the two V8s, as standard on the W12), which is able to read the condition of the asphalt and anticipate its response to be more comfortable. This is something that Mercedes-Benz already uses in its S-Class. The difference is that Audi uses four electric motors fed by the network of 48 V, one per wheel, to act on each arm of the suspension. These engines are also used to reduce the rocking and pitch of the body, and to raise one side of the car 8 centimeters (in half a second) in case it will receive a lateral impact at more than 25 km / h.

Among the driver assistance systems, the jumper assistant stands out (it will arrive in 2018). Audi already has an assistant of this type in several models. The novelty is that now it is no longer a level 2 if not a level 3 (there are six that categorize the autonomous driving ability, from zero to five). This means that the driver can disregard the car\’s controls and engage in another activity while; just be aware of the signals emitted by the car to resume driving. But, in order to be able to use it before, laws must be changed, as it is currently not allowed to release the flyer (and it is illegal to carry out activities such as reading, watching TV or using mobile).

It will also be possible to park the car in a place automatically (available in 2018), either sitting from the inside or outside using the mobile phone. This element, the mobile (with Android operating system), will serve as a key (as in the  Mercedes-Benz E-Class ): the owner can also authorize up to four other phones and have a card so that it can be used in cases like the use of the car by a valet or a workshop. The communication between the car and the mobile is done via NFC (Near Field Communication) approaching it to the door handle and, according to Audi, works even without charging the battery in some mobiles.

The doors have a system that unlocks them electrically. It is enough to throw a few millimeters of the external handle or interior, with very little force. The electric opening and closing mechanism of the boot is optional.

There are three screens on the dashboard. One is the instrument panel, the other shows the information of the navigator and sound equipment, and the rest is used to adjust the air conditioning, in addition to direct access to different functions programmed by the driver; also serves as a writing surface (I have tried very little but perfectly recognized the characters) and keyboard depending on what is being displayed on the upper screen. With this Audi system it dispenses with the traditional rotary control of the MMI. Optionally, an information system projected onto the windshield can be available.

There are different types of front seats. The best have heating, ventilation and massage function performed by 16 pneumatic chambers, which allow its occupant to choose between seven programs and three intensities. The series configuration in the rear zone is three seats, which can also have (the side) the comfort functions of the front and adjustments for the position of the seat and the backrest. Among the options there is a refrigerated space.

For the long body version there is the possibility of replacing the three-seater bench with two individual seats, separated by a console, and, in addition, a special seat for the right rear seat; in this case, the passenger can rest and support the feet on a piece that is on the front back, which is heated and massage (there are two types, three levels of intensity and three sizes of feet). This seat is part of an equipment package which also includes reposacebezas, adjustable by a button, more comfortable, ventilation and massage functions, two folding tables, four-zone climate control, entertainment system in these plazas (two 10.1-inch tablets) and a smaller (5.7-inch) tablet to handle the browser,

The lighting also forms a prominent part of the information provided by Audi. The A8 can have three lighting systems: LED, led matrix and the so-called HD Martrix Led, in which it combines the matrix led lighting system with the long-range laser light (up to 750 m). With this system, pilots use organic led technology (OLED), which gives a more uniform light and allows greater freedom in the design.

The A8 can transmit information to other Audi models, for example on speed limits, weather conditions or the presence of an accident.