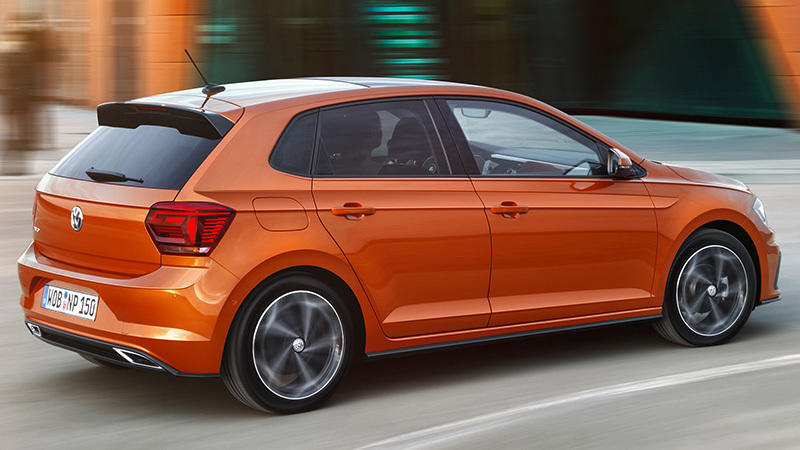 The sixth generation of the Volkswagen Polo will go on sale in October 2017, initially only with gasoline engines, and in December of that same year, also with diesel engines. It is larger than the Polo 2014 , model it replaces, and may have more safety and comfort equipment. In addition to petrol and diesel engines, it will also be available with others that can run on natural gas.

This Polo is built on the basis of the platform MQB A0, the same of the SEAT Ibiza 2017 . Volkswagen says there will be no 3-door version. In 2018 will arrive a model called T-Cross, which will replace the Cross Polo and as this will differ, among other things, by having a suspension that will raise the height of the body a few millimeters with respect to the ground.

The volume gain of the boot is large. It has a capacity of 351 liters, 71 more than before. The  SEAT Ibiza  and the  Suzuki Baleno , both with 355 l capacity, are the only two models of  this list of similar cars  that slightly outstrip the new Polo. Compared to the  Nissan Micra  (300 l) or  Mazda 2  (260 l), for example, the difference is significant.

The range of engines is composed of five gasoline – with powers between 65 and 200 hp, two Diesel – 80 and 95 hp – and one of natural gas of 90 hp. The engine of natural gas and all gasoline, except the 200 hp, are three-cylinder; The rest are four. The transmission can be manual of five or six marches or automatic DSG of seven (of double type clutch ). Traction is always on the front wheels. The following table lists all possible combinations of engine and gearbox.

Volkswagen offers three levels of equipment -Edition, Advance and Sport- and three additional customization packages -R-Line, Black and Style-. From the basic level (Edition) is the emergency brake booster with obstacle detection and pedestrians. The pilots are led and, optionally, the headlights can also perform all lighting functions using LED technology. The available tires range from 14 to 18 inches in diameter.

The most sporty and fastest version, the Polo GTI, has a 2.0 liter turbocharged petrol engine that gives 200 hp and a suspension that lowers the body height by 15 mm with respect to the ground. Its equipment is specific, has wheels of 17 inches as standard, checkered upholstery and decorative elements in red, such as brake calipers, body appliqués and some details of the interior.

There are several multimedia systems available, which can be associated with different screen sizes, between 6.5 and 8.0 inches. They are compatible with Apple CarPlay, Android Auto and have the function Mirror Link that replicates the screen of a mobile phone. As with many Volkswagen Group models, the instrumentation can be analog or digital (Digital Cockpit). The most powerful sound equipment is developed by specialist Beats. In front of the shift lever is a space designed for wireless charging of mobile phones.

Among the safety and comfort elements that you can have are the active speed programmer  (has Stop & Go function, so in a brief stop, if the vehicle in front of the car starts to restart, the system automatically starts moving the Polo again). Emergency braking in case of rear cross traffic, detection of vehicles in the blind spot of the mirror , semi-automatic parking system (the system moves the steering while the driver has to take charge of controlling the speed using the pedals), the Opening and keyless start and the assistant of change of lane involuntary .