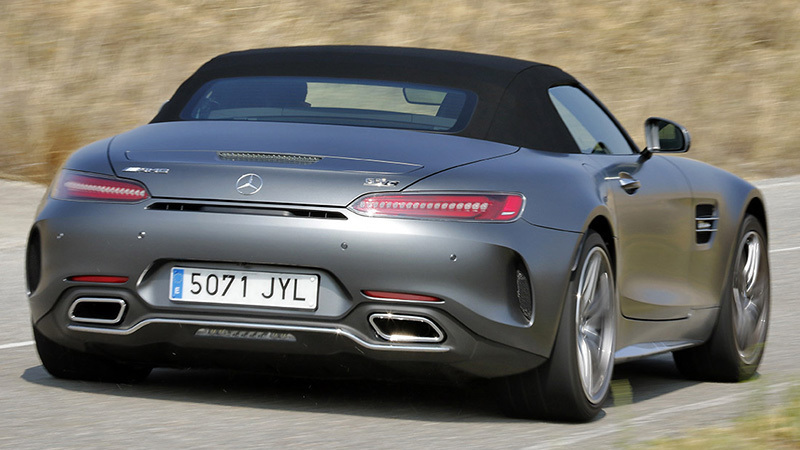 The Mercedes-AMG GT Roadster is a sports convertible, two-seater, with a gasoline V8 engine in the front-center position, with automatic transmission and rear-wheel drive. There are two versions: 476 hp GT and 557 hp GT C. I have tested the GT C and it has seemed to me that its driving to the limit is more difficult than that of an Audi R8 Spyder and a Porsche 911 Turbo, but also more exciting for the ease that it gives to make the rear axle of wheels slide and for the progressivity with which he reacts in these circumstances. The engine accelerates with great force to any regime and the brakes have good power.

The GT C, in addition to being more powerful than the GT, has a wider body, a wider gauge, a directional rear axle, varying firmness dampers, larger brakes, a noisier exhaust system and a differential rear electronically controlled (in the GT is mechanical). The gearbox is always dual clutch and seven ratios and the traction on the rear wheels. There are no plans for full-drive versions.

The eight-cylinder engine, with two  turbochargers  and four liters of displacement, is common to the entire Mercedes-AMG GT range, both Coupé and Roadster. Differences in the management system and in some of the components result in different power levels.

In the GT Roadster it is possible to choose between three driving modes -C (Comfort), S (Sport) and S (Sport Plus) – plus an additional one called I (Individual) that the driver can configure to his liking. In the GT C Roadster there is one more mode, called RACE. The selection of one or the other is done with a rotary control that is in the console . The GT C Roadster, having variable hardness damper, or AMG RIDE CONTROL in the words of Mercedes-AMG, allows you to choose between three firmness configurations – Comfort, Sport and Sport ; button image – regardless of the chosen driving mode.

The hood has an electric mechanism that removes it and puts it in 11 seconds, an operation that can be performed with the vehicle in motion, as long as it travels at speeds up to 60 km / h. The textile part of the hood consists of three layers of canvas and can be chosen in three colors: black, red  and beige. To compensate for the lack of rigidity caused by the removal of the roof, Mercedes-AMG has reinforced some parts of the structure. As a result, the total weight of the GT and the GT C is 55 and 35 kg greater than that of its counterparts with coupe body.

The passenger compartment is identical to the AMG GT Coupé . It is wide in all dimensions, especially in width. Headroom is also good and people around 1.90 meters tall can sit without touching the ceiling. The trunk is small, 165 liters , although it is larger than the R8 Spyder and the 911 Turbo Cabrio, which have 110 and 115 liters respectively. The volume of the boot is the same regardless of the top. The visibility of the road from the driver’s station is poor, worse than the two alternatives cited.

When we tested the Mercedes-AMG GT S Coupe we said that the finished quality was poor in relation to the price of the vehicle and that many crunches were heard in certain circumstances, such as when riding on bumpy asphalt. We also said that the interior was very hot and that the air conditioning system was not able to dissipate it completely. I did not see that AMG GT S Coupe unit, but after testing the AMG GT C Roadster I can not say the same.

There are parts in the interior that, at least in appearance, are identical to those that Mercedes-Benz uses in much less expensive models, like the GLC . Two examples are the instrumentation  and the central screen. But there are others, such as the doors nd the center console  that convey a sense of good bill. Yes, I heard small crunches passing through certain bumps, some of them coming from the dashboard and many others from the roof structure (when the roof was placed on the body). As for the heat inside the passenger compartment, I have not had any problem in that regard on the summer days I’ve had the car. The central tunnel heats up, but not so much to be annoying (at least for me) and the air conditioner cools the interior quickly. Yes the luggage compartment heats up (a lot if you make a sporty ride), but, above all, the hollow of the armrest.