After the first photos of Honda’s Geneva Motor Show Civic Hatch Concept, we bring you scoops of the actual production car, which looks surprisingly similar, right up to the central-mounted dual exhaust tips.

Even the wheels and the body-kit that includes front and rear aprons, plus side skirts and a roof spoiler are identical, though, we can’t say for sure if this prototype maintains the concept’s sizeable front and rear bumper air vents behind the camouflage.

Put one and one together, and you’ll probably arrive to the same conclusion as we did, which is that what we’re seeing here is a performance model, possibly the Si or Type-S, that will be positioned right under the next range-topping Type-R hatch, that we spied late last year with an ever more aggressive wide-body kit and triple exhausts.

This performance variant of the new Civic hatch that targets the VW Golf GTI and Ford Focus ST is believed to sport a milder version of the Type-R’s sizzling 2.0-liter turbocharged VTEC four-cylinder unit, making somewhere in the neighborhood of 230 horses, connected to a six-speed manual transmission, though an automatic may also be on offer. 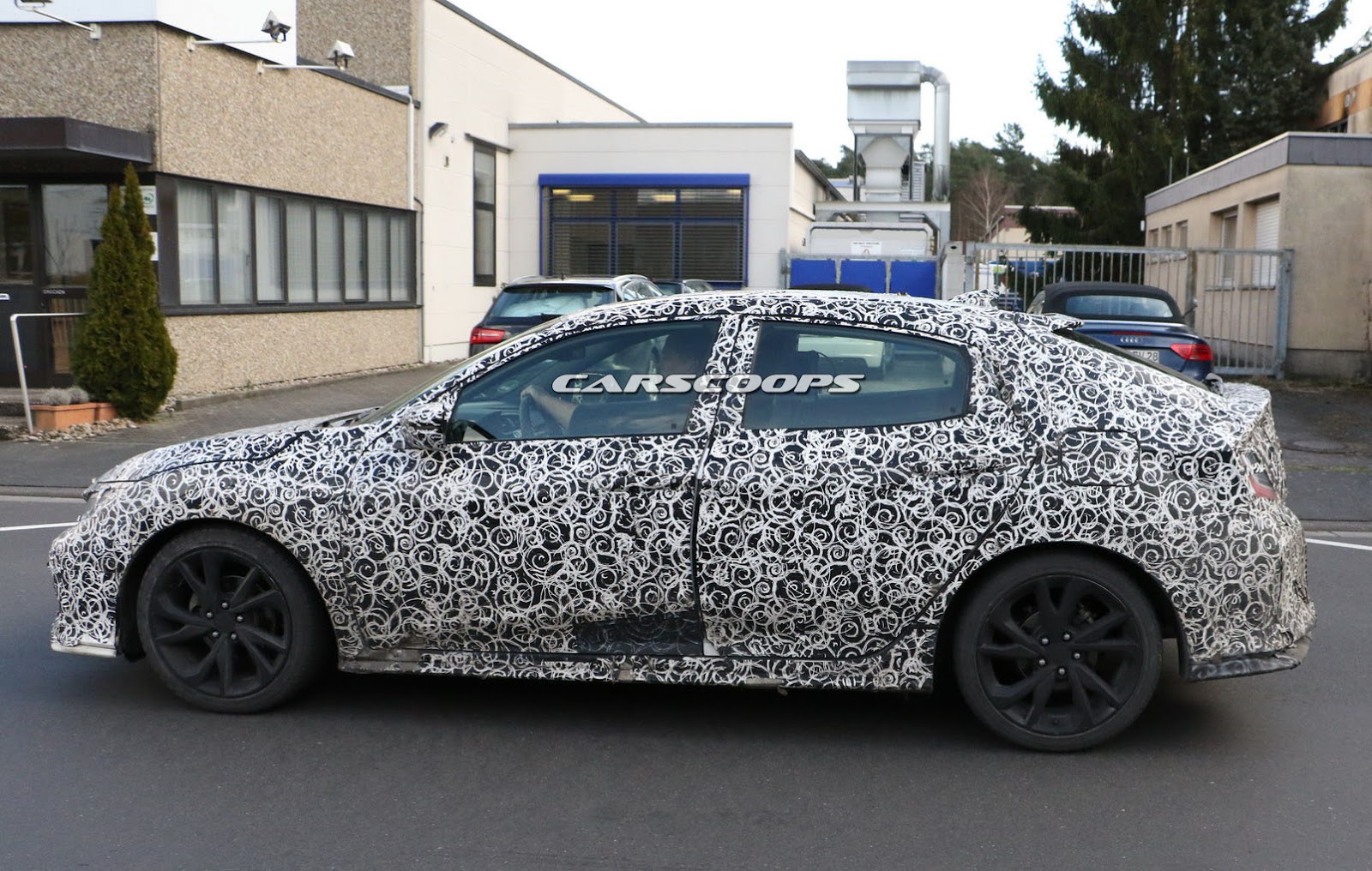 We should learn more about the production car in a few days’ time when Honda presents the Civic Hatch Concept in Geneva.

Ahead of its unveiling next week as a concept car, the next-generation Honda Civic hatchback has been caught out on the open road by our spies in Europe.

Although the Geneva “concept” will be dressed up with a few little extra details, such as oversized alloy wheels and an eye-catching body kit, it’s overall shape will be faithful to the prototype vehicle seen here.

The new hatch will be the third variant revealed in tenth-generation Civic range, with the North American versions of the sedan and coupe already launched.

Going on these latest photos, as well as earlier spy pics of the next-gen Type R, the new hatch will have a curtailed rear end with a shorter overhang than the sedan.

To go with the stubbier tail and liftback, the Civic hatch will likely do without the sedan’s third side window.

Up front, the Civic hatch will deviate little from the template set out by the latest-generation sedan and coupe, with a winged chrome grille integrated into the car’s headlights. At the rear, the new hatch will feature large tail-light clusters that blend into the tailgate’s spoiler.

Under the skin the new hatch will use the latest Civic platform. Recent generations of the Civic hatch have employed a stretched and widened version of the Jazz platform.

Motivation for high-end models will come from a turbocharged 1.5-litre four-cylinder engine. The range-topping Type R will likely use a variation of the 231kW/400Nm 2.0-litre turbo motor used in the current-generation model. 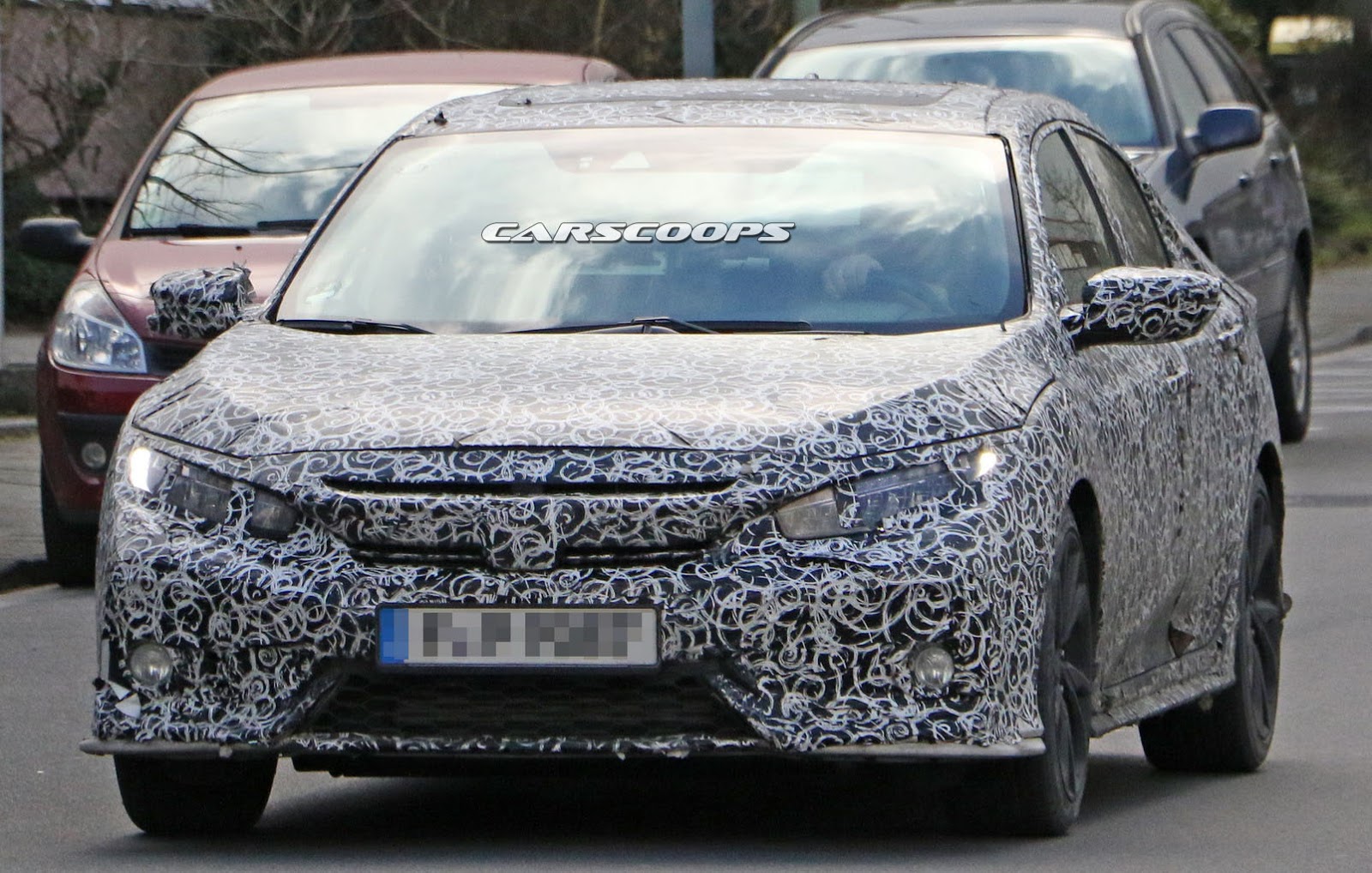 The new hatch will go on sale across Europe in early 2017, with global production to be based out of Honda’s Swindon plant in the UK. Australian availability of the hatch has previously been confirmed, but timing seems to be in a state of flux. The Civic sedan is expected to arrive in Australia around the middle of 2016.