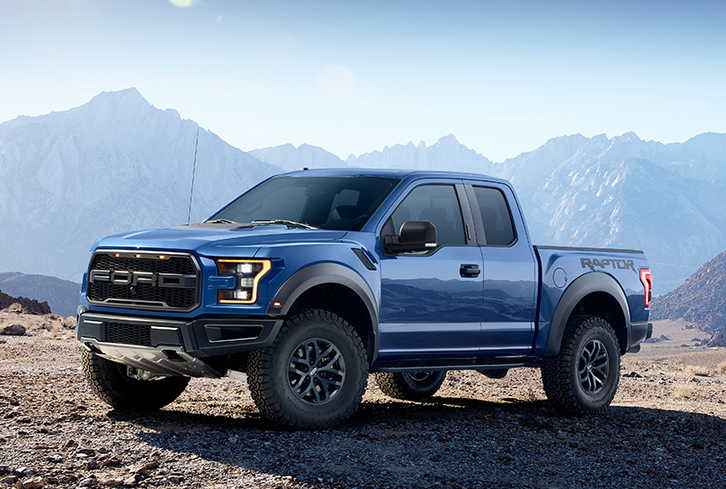 2017 Ford F-150 Raptor – The ultimate off-road runner is back, with the all-new 2017 Ford F-150 Raptor. A twin-turbo Ecoboost V6 engine. A 10-speed transmission. And it’s six inches wider than the standard model. This is the one truck everyone will have a burning, yearning desire for.

The Raptor is still the biggest answer to everyone who’s ever wanted to go running through rocky, dirty, barren deserts at absurdly high speeds, while still maintaining some semblance of road legality. The last model was a huge hit, so it seemed an inevitability that there would be another one. But this really is a huge update.

2017 Ford F-150 Raptor is powered by Ford’s new, second-generation 3.5-liter EcoBoost® engine that produces more power with greater efficiency than the current 6.2-liter V8, which is rated at 411 horsepower and 434 lb.-ft. of torque.

The first-generation 3.5-liter EcoBoost proved its mettle off-road – racing in the original F-150 EcoBoost Torture Test truck in the 2010 Baja 1000, as well as notching repeated wins in off-road race series.

The high-output 3.5-liter EcoBoost is a Raptor exclusive in the F-150 lineup. It will be paired with an all-new 10-speed transmission for improved efficiency.

Raptor’s pioneering off-road mode driving technology has evolved into an all-new Terrain Management System™ that enables the driver to select modes to optimize driving dynamics to environmental conditions – from snow to mud, sand and more.

The 2017 Ford F-150 Raptor features calibration changes to its powertrain, driveline, traction control, ABS and AdvanceTrac stability control for optimal performance. There are six preset modes for the truck depending on terrain and driving conditions:

It’s got new technology, too, to help you drive as fast as is humanly sane across vast expanses of wasteland, including a new transfer case, a Torsen differential up front, and, with perhaps the best feature of any vehicle anywhere ever, a computer with a pre-programmed Baja mode.