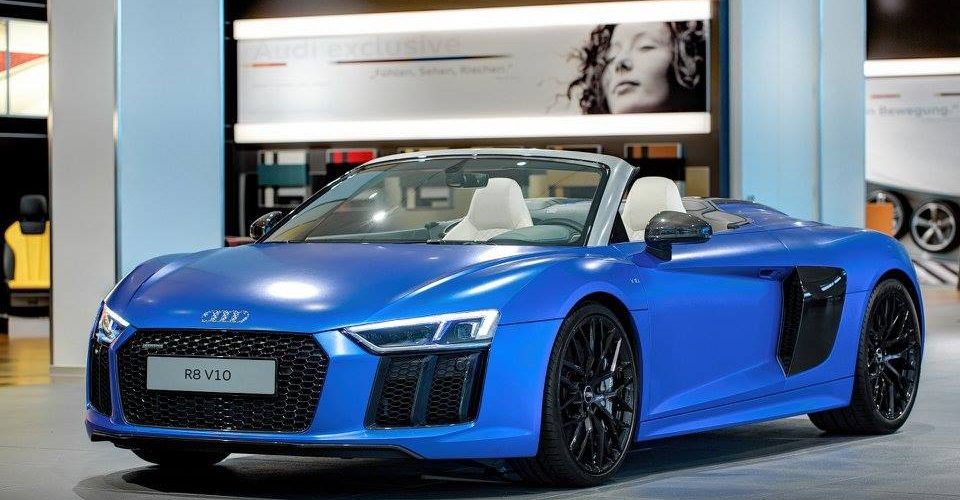 In 2016 Audi gave us the scintillatingly quick second-generation R8 Supercar. And now the German manufacturer has returned with a follow-up ragtop. Behind me is the R8 Spyder. And Audi reckons it’s just as quick and exhilarating as its hardtop sibling. Let’s see if the claim stands up. 2017 Audi R8 Spyder is now available in Australian showrooms priced from $388,500 plus on-road costs. It gets the same mid-mounted V10 engine as the regular R8 coupe, producing 397 kilowatts, and 540 Newton metres.

There’s also a V10-plus Spyder on its way. Like the hardtop sibling, the Spyder gets the same swish, tech-laden Monoposto cockpit, a relaxed day-to-day skill set, and top-flight safety. It might sound farfetched, but this a supercar you could actually live with, day-to-day. For one, the fabric top closes and opens in about 20 seconds, at speeds of up to 50ks an hour. And while you wouldn’t buy a supercar for fuel use, this one’s actually not all that thirsty, when driven sedately. The engine can actually shut down an entire bank of five cylinders during light throttle-up locations in order to save fuel. And, in addition, the seven-speed dual-clutch automatic can decouple itself from the engine during coasting scenarios, basically, allowing the car to freewheel down the road. In pure number terms there is very little rationale to justify the Spyder. It costs $3,400 than the equivalent V10 coupe, weighs an additional 125 kilograms, and is slower in a straight line.
I’ve got one word to counter all of that.

Sound. With the roof down you’ve basically got unlimited access to those ten thumping cylinders situated right behind the cockpit. It’s amazing and, I’m going to say it, well worth the price of admission. To get around the added weight the Spyder’s door seals now have a thicker gauge of aluminium and there’s more reinforcement in the A pillars and windscreen. With all those provisions in place there is no stopping that V10 engine. Zero to 100 takes just 3.6 seconds and you’ve got a top speed of nearly 320ks an hour. The best part is just that zing as you climb to the 8,700rpm red [? rev] line. It’s really intoxicating stuff. In addition, you’ve got that brilliant seven-speed dual-clutch automatic, and, I’m going to be honest, I reckon it’s the fastest gearbox in any modern supercar. More contentious is whether the added 125 kilos in kerb weight is felt around the track. At nearly 1.8 tons the R8 Spyder is certainly no bantamweight. Now, sure, we don’t really have an R8 coupe to compare this car directly against, but, do I really feel like I’m missing out on anything on track? Not at all.

Well, there you have it. The R8 Spyder lacks very little on the racetrack. But there is so much more to this car than go-fast appeal. In fact, while I’ve got it, I’m going to go hit the town because, if you want to be seen, there’s no missing this thing on the road.