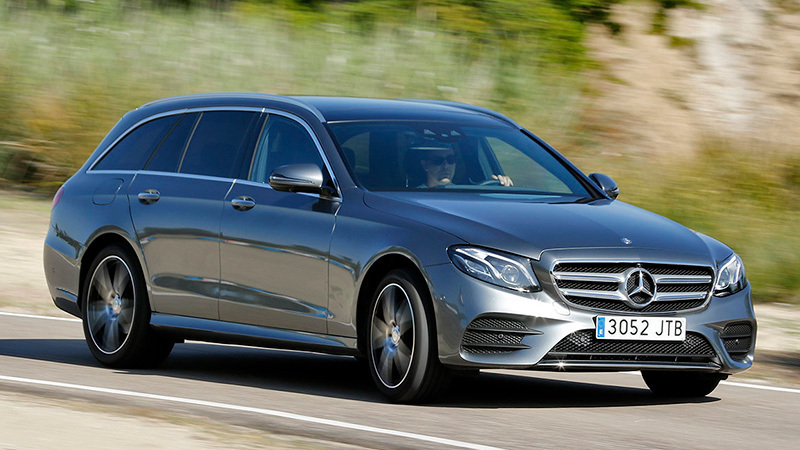 The Mercedes E Class Estate is the variant with a Class E Sedan family body . It measures 4.93 meters in length (1 cm more than the saloon) and has five seats, but optionally may have seven. There is a variant of the E-Class Estate with a preparation to facilitate traffic in unpaved areas, called the E-Class All-Terrain.

The Estate E Class 2016 trunk has 640 liters of capacity, 100 more than the E Class Sedan and 55 less than the model it replaces. It is clearly larger than its more direct rivals (BMW 5 Series Touring, Audi A6 Avant and Jaguar XF Sportbrake), although there are also shorter vehicles that have a larger one (the Škoda Superb Combi , 660 as the Volkswagen Passat Variant , 650 liters).

The most important advantage of the E-Class Estate compared to the E-Class sedan is not so much the larger size of the cargo space but also the better access to it and, above all, the ease of being able to use it to the roof. In addition, it is possible to order several elements that help to keep the packages fixed and orderly, such as a floor aluminum longitudinal rails, straps or spacers. As standard, all E-Class Estate have a gate with automatic opening and closing and a network separating the cargo area and the passenger compartment.

The passenger space is virtually identical to the E-Class Sedan. The only difference (and is very small) is in the free space up to the ceiling in the back squares, where we measured two centimeters more height. In general it is a wide car in which four adults of a height above average can be accommodated with relief.

All engines have four cylinders and are supercharged by a turbocharger (except for the AMG versions, which have six or eight cylinders and two turbochargers). At the moment, all are associated with an automatic gearbox nine relationships, although later some versions can also be ordered with a six-speed manual. Depending on the chosen version, the traction can be in the rear wheels or in the four (4MATIC). This table can be consulted all combinations of engine, gearbox and traction system:

The E 220 d Estate, which we have tested more carefully, has a 194 horsepower diesel engine that gives good performance and low fuel consumption . It does not have a performance as refined as some six-cylinder engines (the Audi 3.0 TDI, for example), but is not at all annoying and clearly improves in this aspect to which the previous model (220 d BlueTEC).

The nine-speed automatic transmission (9G-TRONIC) has an excellent performance: it is fast, it makes the changes very smoothly and, in addition, it allows to maneuver at low speed with much precision. When selecting the “Eco” driving mode, the neutral stops in some situations to advance by inertia.

As in the previous Estate E-Class, the rear air suspension with self-leveling function, which maintains the height of the rear part of the body regardless of the weight of the load to be transported (Mercedes-Benz calls it AGILITY CONTROL). Optionally, two types of suspension can be ordered: AGILITY CONTROL lowered height (as standard, but leaves the body 1.5 centimeters closer to the ground) and AIR BODY CONTROL (with air springs on both axles).

The E-Class Estate can have the same safety systems and help with the E-Class sedan, such as PRE-SAFE Sound (prepares the ear against noise caused by accidents), Remote Parking Pilot ( Motor and move the vehicle from the mobile phone to facilitate parking in close quarters) or the DRIVE PILOT (joins the active speed programmer and the lane maintenance system in one way , and when the driver activates the turn signal, the system You can also make a lane change, if possible). More information on the operation of these and other systems can be found in the “Equipment” section of the E-Class Sedan .

According to our insurance comparator , the most affordable non-franchise policy for a Class E 220 d Estate is offered by Direct Insurance and costs € 389 per year. The borrower is a 45 year old man, with more than 10 of license, who lives in Valencia, travels about 35 000 km a year and park in a community garage.