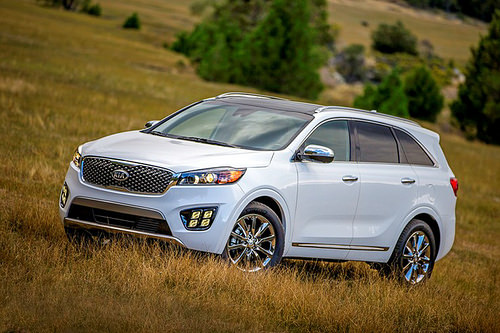 2016 Kia Sorento Interior – The 2016 Kia Sorento made its world debut at the 2014 Los Angeles Auto Show and you can now learn everything there is to know about the American specifications.

The new Sorento is longer, wider and lower, while the body lines have been softened for a more modern look. It can also haul more cargo than its predecessor, while the interior goes up a level as far as luxury and convenience features go. As long as you don’t go with the base model, that is.

The Sorento’s new interior styling is a much bigger shift than the exterior. The new dashboard layout emphasizes the crossover’s width, and it separates controls into various planes. It’s similar to what the brand has done in its new minivan, the 2015 Sedona.

A 185-horsepower, 2.4-liter four-cylinder engine is standard; a 240-hp, turbocharged 2.0-liter four-cylinder and a 290-hp, 3.3-liter V-6 are optional. All the engines team with a six-speed automatic transmission, and front- and all-wheel-drive models are offered.

The base four-cylinder is rated to tow 2,000 pounds while the turbo four-cylinder can pull 3,500 pounds. The V-6’s trailer-towing rating is as high as 5,000 pounds for all-wheel-drive Sorentos.

The Sorento has six standard airbags, but the side curtain airbags only cover the first two rows of seats. As required by law, antilock brakes and an electronic stability system are standard. Active head restraints for the front seats are also standard.