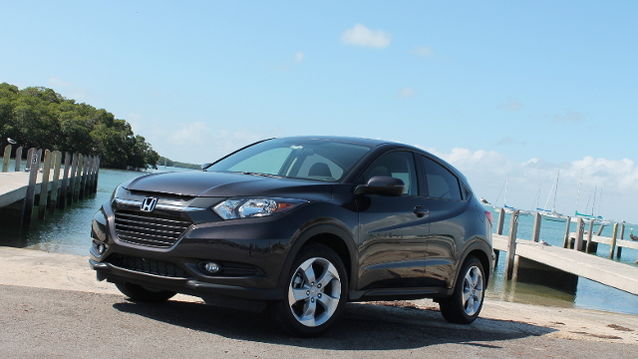 After presenting the 2016 Honda HR-V in all major auto shows in the world, Honda has finally invited members of the automotive press to try the car on the roads of Miami, Florida.

But as if we had not waited long enough, the Japanese manufacturer has promised reporters not to publish any impression of driving the vehicle before April 30. In short, we drove the vehicle, but we will not tell you about that in two months.

In the meantime, we can still point out that the Honda HR-V should know an interesting commercial success at home, where small vehicles have always been popular.

In recent years, you can feel excitement around these small vehicles with four wheel drive. Certainly Honda already offers the CR-V in its alignment, but it has grown so large in recent years that we can not really call it a compact.

The 2016 Honda HR-V, moreover, has an oddly similar format to that of the first generation CR-V, introduced in 1997.

But Honda is far from being the only manufacturer on the market to want to conquer the compact SUV segment. We already know that Mazda will launch a similar vehicle in the coming months, the CX-3, and it also looks very promising.

And that’s not counting the models already marketed as the Nissan Juke, the Subaru XV Crosstrek or Chevrolet Trax. A great war is expected.

We can not give our driving impressions, but we know more about the technical details surrounding the production of the small HR-V, which will be built in Mexico.

Sharing its platform with the Fit subcompact, also assembled in Mexican soil, the newcomer Honda will be available in versions with two or four wheel drive.

A six-speed manual transmission will be offered in entry while a continuously variable automatic transmission (CVT) can also be ordered. Note that only the CVT may be associated with the cog-wheel drive. No manual.

It’s a shame, especially when you know how Honda manual transmissions can be fun to use. But from a marketing point of view, it does not seem convinced of the viability of this recipe.

Under the hood, one engine will be used for all versions of the 2016 Honda HR-V. This is the four-cylinder engine of 1.8 liter (141 horsepower and 127 foot-pounds of torque), which is used in the Civic .

Marketed in three different versions (LX, EX and EXL-Navi) in its first year, the HR-V will be delivered standard with heated seats, a rearview camera, 17-inch alloy wheels and a brake electronic hand.

Other amenities like the start button, the glass roof and LaneWatch system (blind spot camera) will be available as an option.

No price, no date

Honda has much to say about the technical details of his youngest, but when it comes time to answer questions related to marketing, it suddenly becomes less talkative.

For now, we know that the HR-V is expected to arrive in Canadian dealerships in the summer of 2015.

Same story for the price of the vehicle, which is still unknown at the time of this writing. All Honda left sink is that the base model will be offered at just over $ 20,000.

That’s what we know for now the new Honda HR-V. For driving impressions, we’ll talk on April 30 …