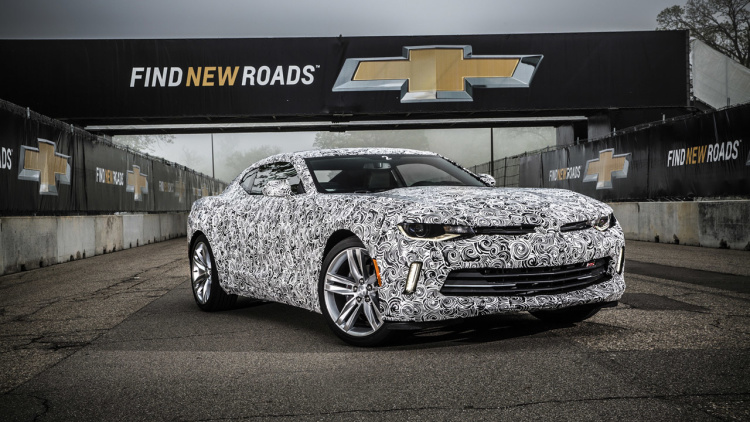 Chevy swears the 2016 Chevrolet Camaro is lighter, faster, and put simply, better, than its ancestors. And after a couple of hot laps around Detroit’s IndyCar race course, our reply is simple. We agree. The fifth-generation Camaro was a pretty solid effort. It brought concept-car styling, big power and, late in its run, track-monster special editions like the ZL1 and Z28.

The 2016 edition is a demonstrative step forward for the Camaro. Carmakers always say their products handle better, especially sports cars. But in this case, it’s true. Chevy cut more than 200 pounds from the Camaro’s curb weight, and it shows. The new platform makes a major difference, too. The result is the 2016 Camaro drives more like a sports car than its predecessor, which feels bulky and dated in comparison.

We experience that first hand during our brief test drive, which only served to whet our appetite for future seat time. Less than 24 hours after the sixth-generation Camaro was revealed, we return to drive V6-powered pre-production prototypes (the V8 and turbo four cylinder are not available). Clad in camouflage, the cars still look imposing, their head- and taillights shining beneath the black-and-white tape at the starting line of the track.

We select the middle car in a group of three. It has the Tremec six-speed manual.Excellent, we muse. A GM test driver leads the group out of the pits and our speed builds. We work through the gears, but settle on third and fourth most of the time. The exhaust note sounds good at wide-open throttle. It rumbles at low speeds and howls when prodded. It’s hard to believe this is a V6.

As we navigate the tight course, and the Camaro shows its stuff. The platform, called Alpha, is also used by the Cadillac ATS and CTS. It’s agile and stiff. We feel that when we aggressively dive into corners. The Camaro is poised and takes what we throw at it. The new electric power-assisted steering system has a better, more communicative dynamic than the old car, thanks to a quicker ratio. We note the stout brakes, which help cover our mistakes and provide confidence.

We get one lap in this car, and it’s a memorable one. Our encore comes in another prototype with the eight-speed automatic transmission. It has paddles, but with only one more lap ahead, we let the Camaro decide when to shift, which it does smartly. It downshifts aggressively when we want it to, but on the brief straightaways the gearbox smoothly gets us to a high velocity.

After driving both, it’s almost surprising how much better the 2016 model feels than the ’15 we tested first for comparison. It stays buttoned-up at times when the old car would have been all over the place. The new Camaro is also about two inches shorter in length and wheelbase. It’s hard to quantify that during a couple of hot laps, but judging by the car’s improved reflexes, it seems to have helped. The last generation relied on raw power and sophisticated engineering to compete with the sporty Ford Mustang, but it also felt closer to Dodge’s heftyChallenger. Now, the athletic 2016 Camaro is much more in step with the ‘Stang.

Though the new car is said to be more than 200 pounds lighter, that’s a blanket number that applies to the entire Camaro range. The V6 model is actually about 300 pounds lighter, and that difference is apparent in our back-to-back drives. After all, the 335-horsepower six-cylinder has only 12 more ponies than last year’s V6, but it feels much stronger and more capable.

It’s a little strange to evaluate a brawny American muscle car on its weight-loss program, but slimming down the Camaro was Chevy’s goal from the start. Chief engineer Al Oppenheiser wanted to “remove the stigma of mass,” from the car to help it reach its full potential, which it feels much closer to than before.

Our time in the Camaro also allowed for a brief inspection of the interior. Like the C6 Corvette, the last Camaro had an aging interior with mediocre materials. The C7 received its upgrade, and the Camaro now follows suit. These prototypes, clad in red and black leather, look surprisingly sharp. The eight-inch screen in the center of the instrument panel was smartly positioned and easy to read, at least during our quick glances while in pit road. Like the car’s driving character, the interior is sharper in every way.

Conversely, the outside looks like the fifth generation. This is still the Camaro, there’s no doubt about that. It takes a close eye to see the differences, which are more apparent when the cars are sitting side by side. The 2016’s headlights squint a little bit more, and the lower front air vents are more prominent. In back, the taillights are shaped differently, and the fascia is creased. There are more differences, though they’re subtle, to say the least.

But the 2016 redesign wasn’t about cosmetics. Chevy already had the Camaro styling down cold, anyway. It wasn’t a problem. The car’s handling was, and Chevy has fixed it. It drives better, and with more energy than before. “My favorite part of the car is the vehicle dynamics,” Reuss said. We only had two hot laps in the car, but we agree wholeheartedly.