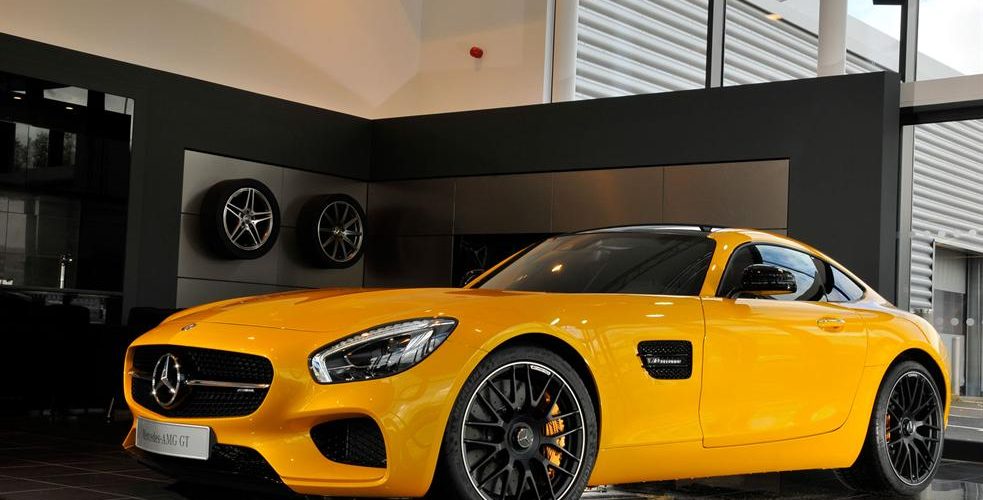 The new 2015 Mercedes-Benz AMG GT supercar is on sale now, with prices starting at £97,195 and the first cars are set to be delivered to owners from April.

What is it?
The AMG GT was conceived as a two-seat rival to cars such as the Porsche 911 Turbo and Aston V12 Vantage, but with a front-engine, rear-drive layout.

As the name suggests, it is designed to fulfil two briefs – that of hard-edged sportster, and also a long-distance, high-performance GT. To this end it has the traditional AMG loud exhaust and slightly lairy styling, but with a cabin full of luxuries and high-end materials.

Underneath lies double-wishbone suspension, while the standard model has a mechanical limited-slip differential and the S model has an electronically controlled diff.

Weight distribution is 47:53 front/rear, which Mercedes describes as ‘optimum’.

The S model can also be fitted with dynamic engine and transmission mounts, which damp out vibrations when you’re just cruising and stiffen up to help the car’s agility when you’re on a twisty road.

What engine does it come with?

Power is provided by a biturbo 4.0-litre V8 engine that comes in two states of tune. The standard car develops 456bhp and 443lb ft of pulling power, while the full-on S model has 503bhp and 479lb ft of shove. Power is transferred to the road through a seven-speed twin-clutch automatic gearbox, which can take care of changes itself or it allows the driver to shift using steering wheel-mounted paddles.

The standard model will hit 62mph from a standing start in 4.0 seconds and carry on to 190mph, while the S hits 62mph in 3.8 seconds and will do 194mph. Serious figures.

Mercedes is serious about the car’s efficiency, which is why even the more powerful model can do a claimed average of 30.0mpg and emits 219g/km of CO2.

What equipment does it come with?

The GT model is not set to arrive in the UK until later in 2015, and will come with 19-inch alloys front and rear, a mechanical limited-slip differential, an AMG performance exhauset, AMG sports suspension and an electronically adjustable rear wing.

From April you will be able to buy the GT S and GT s Edition 1 models. The S comes with the same kit as the standard GT, but adds 20-inch rear wheels (it retains the 19-inch versions on the front), red brake callipers, adjustable sports suspension and an electronic rear differential.

The Edition 1 model gets visual upgrades in the form of a fixed rear wing and front splitter, a carbonfibre roof, black mirror surrounds, performance seats with contrast stitching and a leather and suede covering to the seats and steering wheel.

How much does it cost?