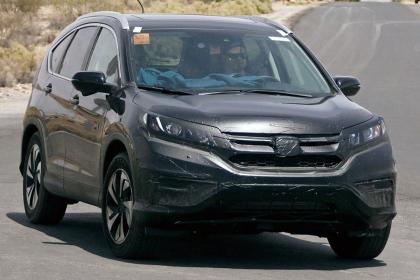 2015 Honda CR-V facelift spied – The CR-V has been around since 1995 when Honda introduced it to Japan and the global market. It wasn’t until 1997 that the CR-V came to the U.S. The first generation CR-V came with a 130-horsepower, 2.0-liter four-cylinder and was available with both front- and all-wheel-drive. While it was loosely based on the Civic, the crossover had taller ground clearance, folding rear seats, and a look uniquely its own. 2015 Honda CR-V facelift

It’s therefore likely the Japanese manufacturer was testing the latest technology likely to feature in its revised CR-V, which will complement a moderate design upgrade. 2015 Honda CR-V facelift wikipedia

As these pictures of the early prototype show, the visual side of this refresh currently appears to focus on the front and rear ends, leaving the sides unchanged. Although the bonnet also seems to have been carried over, the dark camouflage clearly conceals a smaller grille and narrower headlights. This will see the 2016 model year CR-V feature fewer horizontal vents, resulting in a less bulky nose and more clearly defined front bumper lines.

Mid-life improvements at the back aren’t quite so easily made out, although Honda appears to have focused its efforts on the rear lights, and the bootlid’s shape just below the rear window, as well as altering the bumper to better reflect the design up front.

Under the skin, once again there’ll be a choice of front- or all-wheel drive, with the existing engine range carried over – including 118bhp 1.6- and 148bhp 2.2-litre i-DTEC diesels and the 153bhp 2.0-litre i-VTEC petrol unit.

ow in its fourth generation, the CR-V is getting a mid-cycle refresh. Since it debuted in 2012, the fourth generation marches forward as a hot-selling crossover with good all-weather capabilities and room for five adults and their stuff. The 2015 CR-V gets an all-new engine and CVT transmission that bumps EPA ratings up several ticks, new telematics and an infotainment system, and with a host of “Honda Sensing” safety equipment.