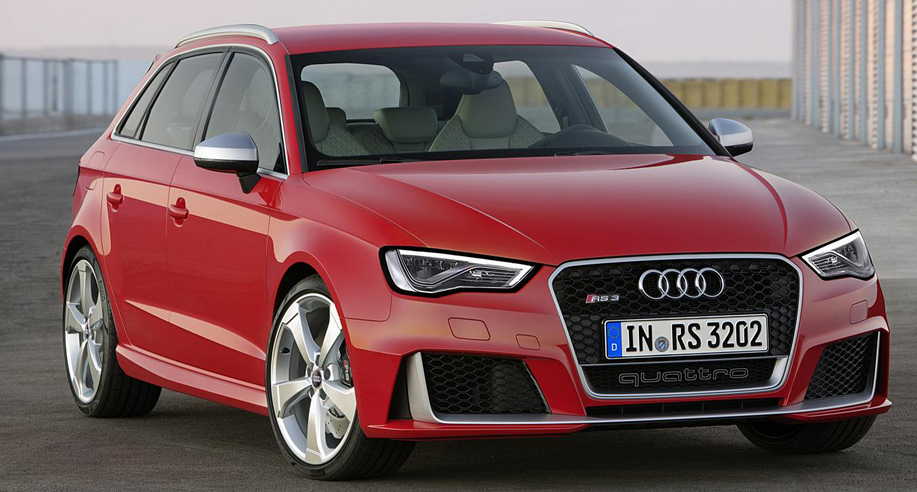 2015 Audi RS3 Specs –  Powered by a retuned version of the RS Q3’s 2.5-litre five-cylinder turbo motor (also used in the last-gen RS3 which wasn’t sold in Australia), the new car packs as much power as an SS Commodore and is quicker than any HSV from 0-100km/h.

Headline figures are 270kW, 465Nm and 0-100km/h in 4.3 seconds thanks to the RS3’s clever Quattro all-wheel drive system and 7-speed S-Tronic dual-clutch gearbox with launch control.

The 2015 Audi RS3 top speed is ordinarily limited to the usual 250km/h, but can be raised to 280km/h if the right option boxes are ticked – those are supercar-bating numbers.

For comparison the RS3’s main rival, the Mercedes A45 AMG, packs 265kW/450Nm and officially takes an extra three tenths to reach 100km/h at 4.6 seconds.

And where the A45 AMG can only send up to 50 per cent of its engine’s torque to the rear wheels, the Quattro RS3 can send everything its got rearwards –  depending on the drive mode selected and grip available. Audi even claim the RS3 is capable of drifting, using the car’s ‘Dynamic’ drive setting and the stability control set to ‘Sport’ (not fully off).

Compared to a standard A3 Sportback, the new RS3 rides 25mm lower and features a 24mm wider front track, while the multi-link rear suspension has been modified to house the gearbox’s clutch which is located rear-wards for better weight distribution.

A passive suspension setup is the standard offering in Europe with adaptive dampers available as an option. Australian specs will be confirmed closer to the car’s 2015 launch.

Stopping power is supplied by Audi’s unique ‘wave’ shaped discs, measuring 370mm up front and 310mm at the rear, while a carbon ceramic brake package will be available as an option.

Visually, the RS3 can be differentiated from the 210kW S3 by its more aggressive front bumper with the typical Quattro fangs fitted to the lower cooling ducts. At the rear there’s a new roof spoiler and muscular rear diffuser which incorporates the trademark twin oval exhaust tips.

The standard wheels are 19-inch items wrapped in 235/35 rubber, though larger and wider alloys will be available as options.

Lightweight carbon-backed bucket seats which shave 7kg off the car’s 1520kg curb weight will also be available as an option.

The new RS3 will make its public debut at the Geneva motor show in March, and is tipped to go on sale in Australia for the first time towards the end of 2015. While it won’t hit Europe until next spring, 2015 Audi RS3 Released the full specs and photos of what may be the baddest modern hatchback they’ve ever built. Here, the 2.5-liter five-cylinder engine puts out 362 horsepower and 343 pound-feet of torque. A zero to 60 mph run gets done in about four seconds